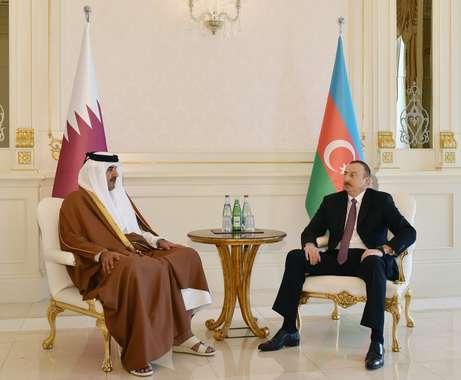 Azerbaijan and Qatar, the two energy-rich countries located in the South Caucasus and the Middle East regions, respectively, have expressed intention to further develop both political and economic relations.

He said at an expanded meeting with Emir of the State of Qatar Sheikh Tamim Bin Hamad Al-Thani that there are many opportunities in this regard.

The emir of Qatar was on an official visit in Azerbaijan on March 8. The expanded meeting was held following the official welcoming ceremony of Sheikh Tamim Bin Hamad Al-Thani.

"We have perfect political relations. We are successfully cooperating within international organizations, in particular in UN, where we always support each other, and in the Organization of Islamic Cooperation," President Aliyev said.

"I am confident that the establishment of joint commission will enhance to intensify economic and trade cooperation between our countries," President Aliyev noted.

Qatar is known in the world as a dynamically developing, economically stable and prospering country. In this regard, President Aliyev believes that Azerbaijan and Qatar should create an economic bridge between the two nations.

"I believe that one of the most important goals for the near future should be to raise the level of mutual trade turnover, and there are good opportunities for this," he added.

Azerbaijan, which eyes the tourism sector as one of the promising fields in terms of increasing the budget revenues, focuses on attracting tourists from world countries. Given the fact that Azerbaijan and Qatar has a simplified visa regime, Baku is interested in more close relations with Qatar in the tourism sector.

"There are direct flights, today your access to Azerbaijan is even more simplified, which, of course, will give an impetus to the development of tourism, and lead, in turn, to the formation of even closer ties between our peoples," President Aliyev said.

The energy sector is one of the most promising fields, where Azerbaijan and Qatar, with their abundant oil and gas reserves, can fruitfully cooperate.

Azerbaijan, wholly located within the South Caspian Sea basin, is among the oldest oil producers in the world. The country is one of the Caspian region's most important strategic export routes to the West.

The Qatari emir also stressed the importance to expand Baku-Doha ties in the economy and trade fields, as well as in the tourism sector.

"We are pleased that more Qatari citizens visit your beautiful country, and we hope to see the same development in Qatar. We should also cooperate in the field of culture. We have many common values in this field," he noted.

Following the expanded meeting, President Aliyev and Emir Sheikh Tamim Bin Hamad Al-Thani held a one-on-one meeting and the sides discussed the development of the political relations between the two countries, as well as other issues of mutual interest.

The most important milestone of the Qatari emir's Baku visit was signing of a package of documents between the two countries.