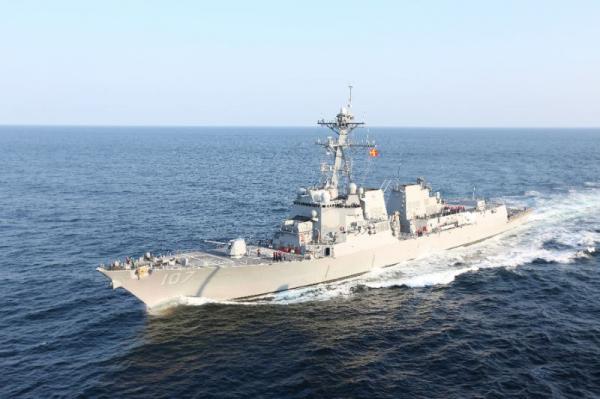 Washington (AFP) - Washington and Moscow on Tuesday accused each other of conducting dangerous maritime maneuvers after two warships sailed closely past each other in the Mediterranean Sea earlier this month.

The US Navy committed a "gross violation of international rules on the prevention of collisions at sea," violating a maritime agreement signed by the US and Soviet authorities in 1972, Moscow said.

A US defense official later gave a completely different account, saying the Russian ship had deliberately maneuvered to approach the USS Gravely.

The Russian frigate had also displayed an international sign showing her maneuverability to be restricted when she first positioned herself about two miles (three kilometers) from the Gravely, the official said.

"The maneuvering demonstrates that (the Yaroslav Mudry) was not in fact restricted in her ability to maneuver, and was thus intentionally displaying a false international signal," he added, speaking on condition of anonymity.

Russia insisted its frigate was in international waters and not "conducting dangerous maneuvers" in regard to the American destroyer.

US officials said the two ships passed within 315 yards (288 meters) of each other. The Russians put the distance at just "60 to 70" meters.

The Pentagon has reported a number of cases of Russian jets buzzing US planes and ships in the Baltic Sea in recent months with tensions between the two sides at their highest point since the Cold War over the crisis in Ukraine.

In April, the US Navy released video footage of Russian aircraft over the Baltic Sea flying very close to another destroyer, the USS Donald Cook, including in a "simulated attack profile."

Russia's defense ministry used the contested incident in the Mediterranean Sea to hit back at the United States.

The Pentagon "has recently accused with great perseverance Russian pilots and marines of lacking professionalism," it said.

"But this incident shows that US (sailors) allow themselves to forget basic rules of maritime safety."

Relations between Russia and the West nosedived over Moscow's annexation of Crimea from Kiev in March 2014 and its support for a pro-Kremlin insurgency in eastern Ukraine.

"These actions have the potential to unnecessarily escalate tensions between countries, and could result in a miscalculation or accident which results in serious injury or death," the US defense official said.

An Illusion Made FlyDubai Pilots Crash Their Plane Into the Ground

An Illusion Made FlyDubai Pilots Crash Their Plane Into the Ground Even as Flydubai Flight 981 took off from Dubai on ...