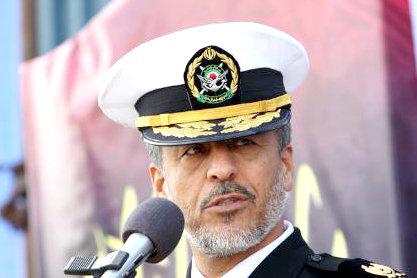 "We hope to unveil new destroyers and submarines this year," Sayyari told FNA on Sunday.
Elsewhere, he referred to the presence of Iran's 41st fleet of warships in international waters, and said, "Special Naval Operation teams have been deployed in the Gulf of Aden, Bab al-Mandab and the Red Sea and now security is established in the Gulf of Aden for the ships supported by us."
"Establishment of security in the Gulf of Aden is a big job while presence in the international waters is considered as a Navy achievement," Sayyari said.
In relevant remarks last Tuesday, Sayyari underlined the Iranian experts' capabilities to design and build different vessels, including destroyers, and said, "We can design destroyers from point zero and the designing of Damavand destroyer was fully indigenized and our Jamaran destroyer has the capability to carry helicopters and torpedoes."
In recent years, Iran has made great achievements in its defense sector and attained self-sufficiency in producing essential military equipment and systems, including destroyers.
Iran's first home-made destroyer, Jamaran, was launched in late February 2010. The Mowdge Class vessel has a displacement of around 14,000 tons and is equipped with modern radars and electronic warfare capabilities and is armed with a variety of anti-ship, surface-to-surface and surface-to-air missiles.
'Damavand' destroyer joined the country's fleet of warships in the Caspian Sea in March 2015.
The second-generation and highly-equipped Iranian destroyer joined the country's Northern fleet in a ceremony participated by Defense Minister Brigadier General Hossein Dehqan, Secretary of Iran's National Security Council (SNSC) Ali Shamkhani, Rear Admiral Sayyari and Head of the Self-Sufficiency Jihad Department of the Iranian Navy Rear Admiral Ali Qolamzadeh.
In an interview with FNA at the time, Qolamzadeh elaborated on the features and specifications of Damavand, and said, "The 7-story destroyer is 90 meters in length and armed with advanced anti-surface and anti-subsurface weapons and air defense systems to defend itself."
Noting that the home-made 'Asr' phased array radar system, capable of detecting and identifying targets with a radar cross section of 4 meters in a 200km distance, has been mounted on the destroyer, he said, "Base-controlled radars, a highly advanced propulsion and command-and-control systems which enjoy high power and capability are only a few of the systems mounted on Damavand destroyer."
Qolamzadeh said in addition to combat operations, Damavand could also be used for training and naval missions, adding that it has been equipped with systems to be used for electronic warfare.
"The operational radius of Damavand is so vast that it can sufficiently be used for all naval missions in the Caspian Sea," he underlined.

Russian warships have started searching for mines and submarines in the Black Sea and the Caspian Sea in the framework ...