Once more on the Trans-Caspian Gas Pipeline Energy 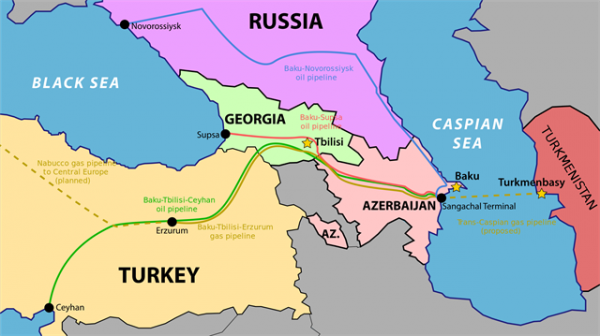 Diplomatic attention has intensified on the project of the Trans-Caspian Gas Pipeline (TCGP) while both obstacles to and incentives for its realization increase. Turkmenistan's commitment to the project may be inferred from the finally completed construction of its East-West Pipeline (EWP) across the south of the country, ending on the coast of the Caspian Sea. Its volume is 30 billion cubic meters per year (bcm/y), which has long been the TCGP's projected volume.

But there is nowhere to go for any gas that it might carry. Last year the Vice President of the European Commission in charge of the Energy Union, Maros Sefcovic, said that he expects gas from Turkmenistan to reach Europe by 2019. Because Turkmenistan's official position has always been that it will sell its gas at its border to anyone who will build a pipeline up to that border, it is incumbent upon the European Union to take an active role. A quadrilateral Azerbaijan-EU-Turkey-Turkmenistan commission has been formed to address the question.

Since the first (American-backed) TCGP project failed in the late 1990s, it has never been clear who would build it (now that the Europeans are the ones who want it) and how it would be financed. The financing would also require an insurance regime, no doubt reinforced by syndicated reinsurance. It remains unclear who would be willing to assume the risk.

Since the Americans lost interest over a decade go, the TCGP project has never found a commercial champion, a company ready to lead the project and put its own money in, like BP did for the Baku-Tbilisi-Ceyhan oil pipeline for example, or like SOCAR has done for TANAP. Most big international companies that have been approached about this project want not just to develop the pipeline but also to have a large role in upstream field development. They do not want to risk billions of dollars building the pipeline if they will not be making profits from upstream production.

Still, TCGP has been listed by the EU as a "Project of Common Interest" and, as such, it could benefit from a streamlined permitting process, receive preferential regulatory treatment, and apply for EU funding from the Connecting Europe Facility.

The obstacles are political; nevertheless, Sefcovic is correct about the technical feasibility. Turkmenistan could indeed put gas into the Southern Gas Corridor (SGC) by 2019, if the TANAP pipeline is construction to carry 30 bcm/y. However, present plans are for initial construction at a volume of 16 bcm/y, to be scaled up to 23 bcm/y by 2023, and to 31 bcm/y only by 2026. (This could in turn later be doubled to 62 bcm/y if supply and demand justify the quantity.)

But if Turkmenistan signed the requisite export contracts, then there would be time to put extra compression and looping into the pipeline construction so as to start in 2019 (or 2020), at a volume greater than currently planned 16 bcm/y.

Such a manner of proceeding would necessarily limit Turkmenistan's exports to about 10 bcm/y, which means that the TCGP would not be used. The 10 bcm/y quantity is equivalent to the stranded gas capacity that is now available in the Caspian offshore, developed over the years by the Malaysian firm Petronas at a cost of several billion dollars, but which has nowhere to go.

Turkmenistan's renewed interest is due to its desire to be less dependent exclusively upon Chinese gas purchases and probably also its sense that sales through the Turkmenistan-Afghanistan-Pakistan-India (TAPI) pipeline will be continue to be delayed by security problems in Afghanistan that have so far prevented construction there. Sales to Russia never recovered after the 2009 explosion that wrecked an important branch of the Central Asia-Center pipeline, which was followed by mutual blame and recriminations. These sales are now nearly non-existent.

Despite some Western calls for diplomacy with Russia to promote the TCGP, it seems unlikely that this will work, given current Russian antagonism against Turkey, in whose interest the TCGP would be. Russia tries to suggest that Azerbaijan opposes the TCGP, dividing it from Turkey, but this allegation does not accurately portray the situation. Azerbaijan has always declared itself willing to facilitate transit of gas from Turkmenistan into the SGC and through Turkey to Europe, even as Azerbaijan continues to develop its own offshore gas deposits, not just Shah Deniz Two but also Absheron (an agreement is nearly ready with the French firm Total) and others.

As it is generally known, Russia's opposition to the undersea pipeline project has always been expressed in terms of environmental security, and Turkmenistan has always replied that any pipeline will be built to the highest international standards. Also, Russia maintains that such a pipeline requires the agreement of all five littoral countries, while Turkmenistan and Azerbaijan argue that if they want to build a pipeline between the two countries, then they have the right to do so.

At the same time, it is unlikely that Iran, invoking its wish for an "equal" division of the Caspian Sea, will lift its objections against TCGP. Turkmenistan's exports to Europe would not compete with Iranian gas exports, which mainly go to Asia. However, Iran is continuing to flex its diplomatic muscle and still covets the impractical idea of transiting Turkmenistan's gas through its own territory to Turkey for European delivery.

A little less than ten years ago, when Azerbaijan-Turkmenistan relations began their rapprochement following the death of President Saparmurat Niyazov in Ashgabat, there was discussion of interconnecting the offshore Turkmenistani gas fields with the offshore Azerbaijani gas fields as a symbol of the new cooperation. Although the volumes would not necessarily be on the order of 8-10 bcm/y, this is still a relatively inexpensive way to begin to proceed, as a demonstration of political intent.

Azerbaijani soldier Vusal Aliyev was killed by a sniper shot from the Armenian side on July 5 at 12:30 PM. Soldier ...