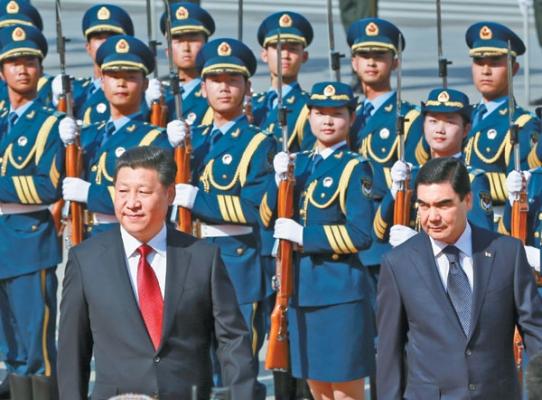 Turkmenistan and China have confirmed their readiness to further enhance economic partnership in view of its enormous potential, national interests and a common vision for the future of the Asian region, the Turkmen government reported on June 24.

The remark was made during a meeting of Turkmenistan’s President Gurbanguly Berdimuhamedov with China’s President Xi Jinping held within a framework of the Council of Heads of States of the Shanghai Cooperation Organization (SCO) meeting in Tashkent, Uzbekistan.

Berdimuhamedov proposed to develop a special program to expand the partnership within the Turkmen-Chinese Cooperation Committee and attach special attention to cooperation in the spheres of energy, transportation and high technologies.

Turkmenistan considers China as an important partner in the Asian-Pacific region given the fact that the two countries have big possibilities for the beneficial cooperation in the sphere of transport.

Turkmenistan is currently engaged in the creation of large scale, combined transit-transport systems and logistic infrastructure which is aimed to link Asia and Europe. In the future the system is expected to include transit corridors which connect the regions of the Caspian Sea, Black Sea and Baltic States.

“Consequently, we will form a route from the Asian –Pacific region through the territory of Central Asia to the markets of Europe and Middle East,” the report of the Turkmen side reads.

Chinese President Xi Jinping, in his turn, said China is Turkmenistan’s main partner in energy sector and praised the long-term cooperation in the gas industry.

He also underlined that the countries have a big potential for the cooperation in the sphere of transport, mentioning Turkmenistan-Kazakhstan-China railway route.

The route is expected to greatly enhance the trade between the two countries. The main advantage of the route is speed of deliverance of goods.

Presidents of Azerbaijan and Iran made statements for the press