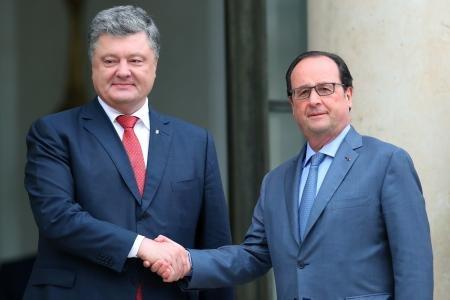 French President Francois Hollande and his Ukrainian counterpart, Petro Poroshenko, insisted Tuesday on maintaining European sanctions against Russia, on the basis of Russia's non-compliance with the Minsk agreements.

The remarks came during a joint press statement from the Élysée Palace, on the same day that the permanent representatives of the European Union (EU) agreed to extend economic sanctions against Russia for another six months, until late January 2017.

The sanctions have been in place since March 2014 following the reunification of the Crimea with Russia. The reunification took place after the convulsive events in Kiev, which started with a coup in February and which triggered the armed conflict in the Donbass.

"We will always be ready, if the agreements of Minsk are fully complied with, to progressively lift sanctions, but at present, we must ensure the maintenance of sanctions in relation to Minsk," Hollande said.

Both leaders are in favor of resolving the conflict in eastern Ukraine using the so-called 'Normandy format' referring to meetings between the leaders of France, Germany, Russia and Ukraine.

They also spoke in favor of holding a summit using the same format, without specifying a date.

The United Nations recently urged the warring parties in Ukraine to prevent civilian suffering as a result of hostilities in the east.

According to the spokesman for the Secretary General of the UN, Stephane Dujarric, the organization is concerned about the deteriorating situation in regions like Donetsk, where innocent people 'are caught in the crossfire' between government troops and rebels.

Dujarric did not hold any of the parties involved in the conflict, which began in 2014, responsible for the violations of the ceasefire achieved last year in the capital of Belarus, Minsk.

full text of Treaty of Gulistan (1813) In the name of Almighty God With the intention to cease horror of the ...

Baku : A city of contrasts

IIKSS- Baku is  a city of extremely sharp contrasts. Every step taken out the front door guaranteed to ...