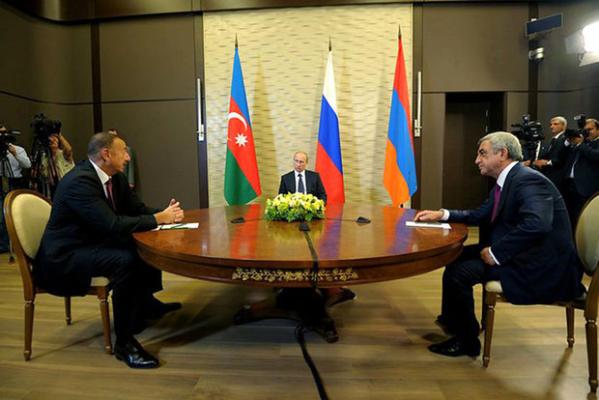 Russian President Vladimir Putin, participated on Monday in a meeting with the leaders of Armenia and Azerbaijan in an effort to find political solutions to the conflict over Nagorno-Karabakh as the co-president of the Minsk Group.

Putin first separately held talks with the heads of Armenia, Serzh Sargsyan, and of Azerbaijan, Ilham Aliev, respectively in St. Petersburg, before the trilateral meeting on Karabakh.

Presidential advisor Yuri Ushakov elaborated that on the Russian part there will be a "very active" attempt to support the parts in a political arrangement to this conflict, that goes back to the Soviet period.

Ushakov underlined the decisive role to be played by Moscow for a cease of combat actions, which took place in the contention lines between the armies of Armenia and Azerbaijan, between April 2 and 5 of this year.

That last day met in the Russian capital the heads of the General Staffs of the three countries in order to restore the armistice in the conflictive zone, enacted in 1994.

According to Ushakov, Moscow exerts its mediating mission based on the official statements of the presidents of Russia, the United States and France against a solution of force to the conflict of Karabakh.

The position of co-presidents of the Minsk Group -asserted Putin’s advisor- has been a call to leaders of Armenia and Azerbaijan to solve disputes on the basis of universal principles of not using force or threats.

He also mentioned the respect to territorial integrity, equality and the right of peoples to self-determination.

With the mediation of the Minsk Group’s foreign ministers (Russia,

the US and France), in Vienna, May 16, the presidents Sargsyan and Aliev had the first meeting since the conflict started in Karabakh.

The parts in conflict committed to respect the truce and coincided on the need to investigate facts in the violations of ceasefire in April, under the direction of the Organization for Security and Cooperation of Europe. Baku and Yerevan have continued until now blaming each other for the hostilities that do not cease in the security line.

From Stepanakert, capital of Nagorno-Karabakh, the Presidential Press Secretary David Babayan gave relevance to the meeting this Monday

in St. Petersburgh as "after the Summit of Vienna a new line was opened in the process to solve the conflict", he declared to the local media.