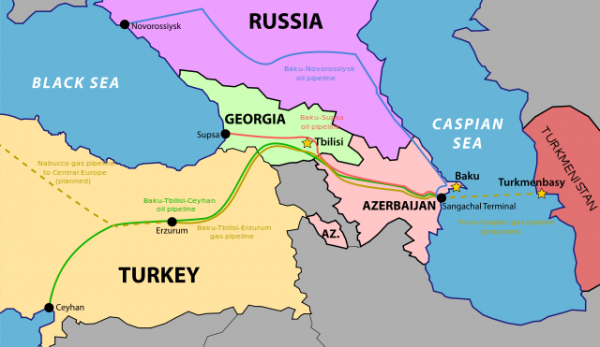 With the first Mumbai-to-Moscow train scheduled to chug through Azerbaijan this August, railways seem set to become the new oil for the Caspian Sea nation.

Better known for a wealth of energy and a lack of regard for civil rights, Azerbaijan is now on track to become an international railway turnpike. The country has been developing railway routes north, west and south amidst the oil-price crisis, which severely cut into the country’s petro-income.

So far, the India-Russia railway project is not a fully rail-based route, rather a rail-sea-road-rail-shipment arrangement. Goods coming by rail from Mumbai will be ferried to the Iranian port of Bandar Abbas in the Persian Gulf, then carried north across Iran by rail to the city of Rasht. Trucks will carry the load to the Azerbaijani border town of Astara, and then a train will carry it to Moscow, said Javid Gurbanov, chairperson of Azerbaijan Railways.

Baku says the route, part of a north-south transit corridor, will carry 5 million tons of goods annually. For a smoother shipment, Iran and Azerbaijan are negotiating the construction of a rail link between the cities of Rasht and Astara. Iranian President Hassan Rouhani is due in Baku in August to discuss funding and technical matters. Azerbaijani officials say they may lend part of the estimated $900 million to Iran for the railway project.

Baku gave a $775-million loan to another neighbor, Georgia, for the ongoing construction of another international railway link, Azerbaijan-Georgia-Turkey. At the initial stage, this route will have an annual capacity to carry a million passengers and 6.5 million tons of cargo.

Azerbaijan also completed this year a test run of another rail route, meant to connect Ukraine to Central Asia. Looking for a way to bypass hostile Russia, Ukraine hopes to reach Central Asia and China’s markets by a combined rail-and- ferry corridor.

Increasingly, Azerbaijan is happy to oblige. That said, cash for these plans could spark a bit of a debate. The World Bank predicted that the Azerbaijani economy, already hard hit by a currency devaluation and the slump in oil prices, will contract by 1.9 percent in 2016.  Economic growth won’t nudge back over one percent until 2018, it said.

IIKSS - During the trip of the Head of Turkmen State, special attention was paid to the issues ...

By Aynur Karimova Turkmenistan, which ranks sixth for its natural gas reserves of 265 trillion cubic feet, has started ...