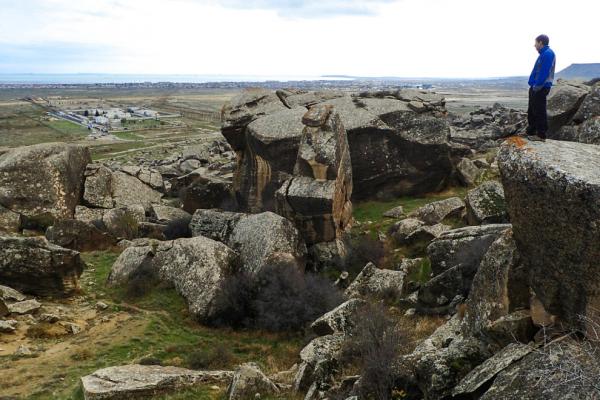 The boulders sit on a hillside above the glittering mirror of the Caspian Sea.

They are made of limestone, these weathered, bone-smooth rocks. They are the color of chalk. Some are shaped—partly hewn—into oblong surfaces: into tympanums. Hammer them with a fist-size cobble: They produce a strange, haunting, almost metallic gong that carries far on the desert winds. Archaeologists believe they are Stone Age signaling drums. Their ringing comes down to us through the millennia—through unknowable histories, migrations, lives, wonders, discoveries, wars—from the earliest times of human occupation in the Caucasus. Silent until touched, until struck, the stone drums of Gobustan hold the voices of ghosts.

My guide Rufat Gojayev and I have walked miles of grey plateaus in eastern Azerbaijan. We have leaned into the cold raking winds that blow from Russia, from the north. We have stumbled—muddy, unshaved, shining-eyed, cored-out by lean, 30-mile days—into the arid shores of the Caspian Sea. It is a barren place of flat-topped mesas. Of ruddy buttes. Of mud volcanoes bubbling up cool methane through cauldrons of mineral soup. A vast badlands. A moonscape.

It was not always this way. 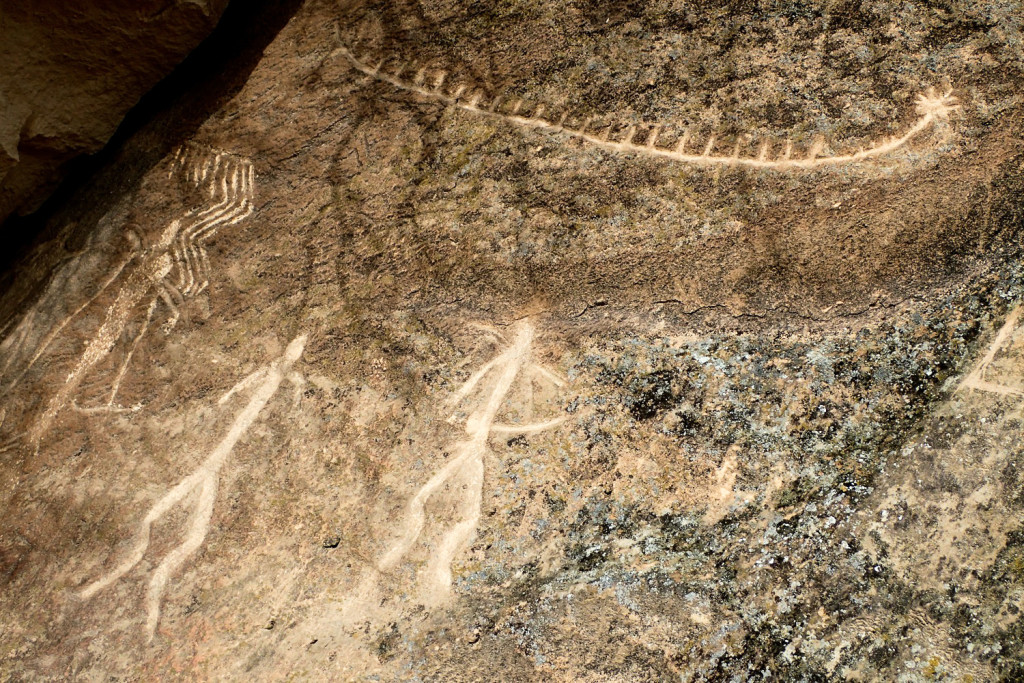 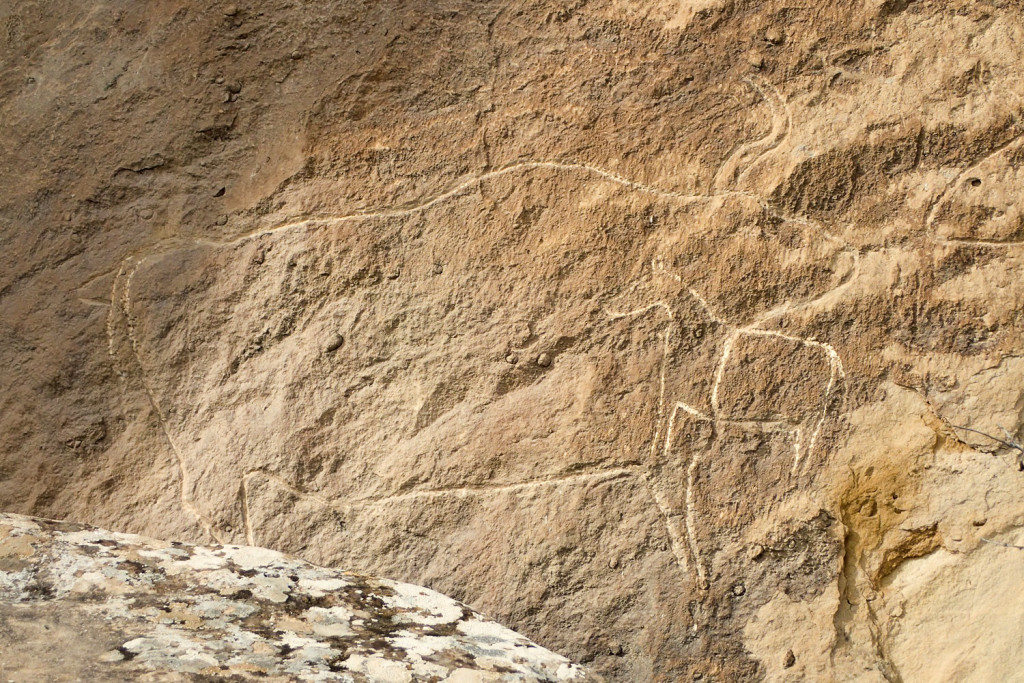 At Gobustan National Park, which encompasses several parched mountains a few miles inland from the sea, we encounter dozens, then hundreds, of petroglyphs. There are, in fact, more than 6,000 drawings on stones here. It is one of the largest and best-preserved galleries of prehistoric rock art in the world. The ancient images capture a vanished Stone Age panorama. They depict a landscape that was wetter and greener about 15,000 years ago. The Ice Age was ending. The desert plains bloomed with lush grasses and open woodlands. Human hunters, having migrated to the region from Africa perhaps 30,000 years ago, recorded this transformation with zest on limestone canvas. The walls of the Azeri peaks are populated by herds of aurochs (wild bulls), wild asses, Persian wild goats, wild horses, gazelles, lions, wolves. It was a Serengeti in the Caucasus.

Some drawings are pocked with spear impacts. Spirit animals. Perhaps hunted symbolically in stone. There are lines of dancers. There are abstract squiggles like representations of music, of pure thought. Inner maps. Lost geometries. Most of these messages are inscrutable now, mysterious, impossible to decode. They are relics not just of a forgotten physical world but also of another mindset, another state of being.

What was it like to walk into a virgin Earth?

“I think they hit these stones to tell others that food was nearby,” says Gojayev, pounding one of the hilltop boulder-drums with a rock. “This was like a lookout point for animals.”

Or did they convey something more?

In West and East Africa, in the forest cultures of the Amazon, drums conveyed complex information. “Talking Drums” replicated the speech of tonal languages. Phrases could be transmitted quickly across six or seven miles of trail. Colonial Europeans were astonished to find that details of their presence in the jungles of the Congo were anticipated, for example, long before they set foot in villages. Drums were a proto-Internet. This primordial human technology, echoing from the basement of time, has all but disappeared within the past lifespan.

We walk down the skeletal hills toward the Caspian Sea.

We pass younger glyphs. Camels—evidence of the Silk Road caravans of the Middle Ages. Then, on a square stone, the first words appear: IMP DOMITIANO CAESARE AVG GERMANICO LVCIVS IVLIVS MAXIMVS LEGIONIS XII FVL. It is a political poster frozen in time. It dates from between 81 to 96 A.D. A man from a faraway Mediterranean superpower, possibly a soldier, chiseled it. It translates to: “Under Emperor Domitian Caesar Augustus Germanicus, Lucius Julius Maximus, the Twelfth ‘Lightning’ Legion.” It is a monument to conquest. It marks one of the easternmost boundaries of the Roman Empire.

In the small town of Gobustan we sleep in a half-built house.

The house belongs to one of Gojayev’s friends. It is unheated, cold. It is snowing. We sit at a dusty table surrounded by bottles of preserved fruits from the garden. The friend is religious. He talks about the Islamic version of the End Times. There will be a bogus prophet and there will be the true messiah, the Mahdi. Everyone will be judged, the friend says. I can barely keep my eyes open. Icy winds suck at the windows. The night throbs: It is the faint drumbeat of a coastal highway that leads across the old phantom savannas to Baku, the capital of Azerbaijan about 40 miles away, where yellow light seeps into the sky, like a false dawn.

How Russia hopes an Iranian port will circumvent One Belt, One Road