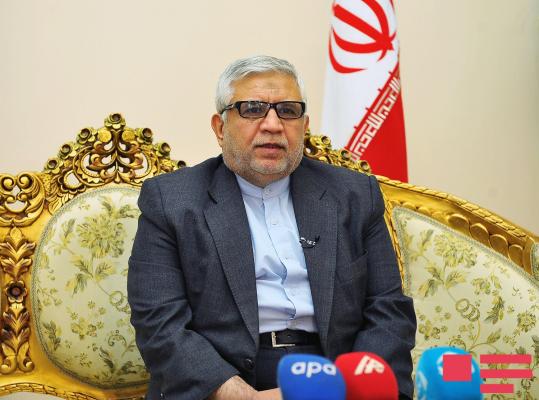 He was commenting on criticism from several Azerbaijani MPs against Iran that has cancelled the visa regime with Armenia and is taking steps for further expansion of relations with that country.

“At the last session of the Azerbaijani parliament, MPs in general took a positive stance regarding the country’s relations with Iran. Only three MPs criticized Iran. However, on this basis, we should not regard the parliament as a body that is able to undermine the Iranian-Azerbaijani relations,” the ambassador noted.

The ambassador said the ratification by the Azerbaijani parliament of the documents signed between the governments of Azerbaijan and Iran is also a good indication in terms of developing bilateral relations.

According to the diplomat, Iran does not demonstrate a biased position on the Nagorno-Karabakh conflict.

He stressed that Iran’s position on the Karabakh conflict has been remaining unchanged for years.

“Iran has always supported Azerbaijan within international organizations. Iran’s principled positions remains that it supports the territorial integrity of all countries, including Azerbaijan,” he said emphasizing that Iran favors a peaceful solution to the conflict and doesn’t want resumption of the war in the region.

Speaking about the Palestinian conflict, Iran’s ambassador said that the Israeli regime has invaded Palestine, torturing its people.

The Nagorno-Karabakh conflict is not similar to the Palestinian conflict, the diplomat stressed, calling the Israeli regime ‘a threat to the whole world.

“So this regime must change so that the Palestinian people can have their land back. The people of Gaza are in blockade today. The Israeli regime is inhibiting delivery of food and drugs to them. People on the western bank of the River Jordan also suffer from Israel’s pressure. I think these two conflicts are not comparable. We’re concerned by the killing of Muslim women and children in any part of the globe, and we make efforts to prevent it,” he said.

The ambassador reiterated that the Karabakh conflict is not similar to the Palestinian conflict.

“The massacres and oppression people suffer at the hands of the Israeli regime there are the same as those that happened in Karabakh. Another thing is, the leaders of the countries are negotiating settlement of the Karabakh conflict, and we hope these negotiations will come to fruition. But we don’t see a peaceful solution to the Palestine problem, nor do we believe it,” the diplomat concluded.

Repairs in Naftalan airport, which will be the seventh international airport in Azerbaijan will begin in 2017, director of the ...