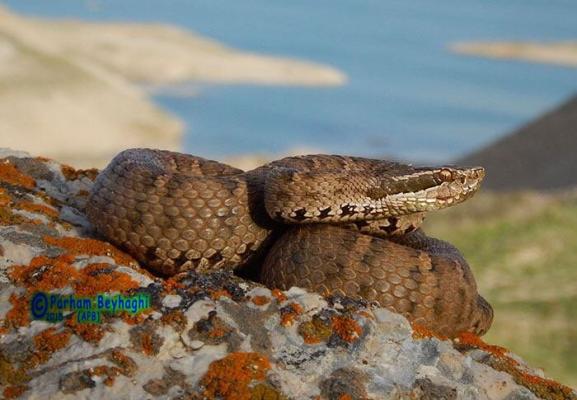 Vipers are the most efficient poisonous snakes of all. Their long fangs can inject venom deep into a victim. The venom acts mainly on the blood and muscles of the prey.

Vipers usually have short, thick bodies and triangular heads covered with small, ridged scales. There are two main groups of vipers. Pit vipers have large pits on the face and other vipers do not.

Some especial vipers such as Green bush viper (Atheris squamigera), Puff adder (Bitis adder), Sumatran pit viper (Trimeresurus sumatranus) and Rattlesnakes from (Crotalus) are known more but here in our country we have an especial pit viper whose name is Caucasian pit viper (Gloydius halys caucasicus). This magnificent snake in Iran known as Afee hofredar-e Qafqazi.

Caucasian pit viper is a specific subspecies of Viperidae Family which recognized by Nikolsky in 1916. Evolution has perfected the viper family’s highly efficient and rapid method of envenomation. The unusually sophisticated bone structure of the head and long, hollow, recurved fangs of vipers have a great role on their successful hunt.

The species main range is from the Northeast coasts of the Caspian Sea towards the steppes of Kazakhstan, North Turkmenistan, North Uzbekistan, Kyrgyzstan, North Tajikistan, and Northewest China, most of Mongolia, Northwest Manchuria, and South Siberia.

No comprehensive molecular phylogenetics have been provided so far for Gloydius. The genus Gloydius was for longtime included in Agkistrodon (now considered exclusive of North and Central America). Researchers by morphological character analysis (1981) and molecular tests confirmed Caucasian pit viper as a Gloydius halys caucasicus. So any other names aren’t scientific.

Population of Caucasian pit viper in Iran, estimated average but it hasn’t scientific basis. International Union for Conservation of Nature and Natural Resources (IUCN) not listed this subspecies till now. This subspecies also is not listed on Convention on International Trade in Endangered species of wild Fauna and Flora (CITES). Comprehensive and detailed studies about this subspecies is really important in Iran because raises some novel issues at the intersection of scientific research, conservation efforts and so on.

Rattlesnakes are best known for, and most easily recognized by, their rattle. The rattlesnake babies are born with what is called a pre-button. The baby snake loses this piece when it sheds its skin for the first time. With the shedding a new button appears. But Caucasian pit viper doesn’t have this piece although it makes noises by different mechanism.

Aside from this pair of simple eyes, Caucasian pit viper just like rattlesnakes are able to detect thermal radiation emitted by warm-blooded organisms in their environment.

Functioning optically like a pinhole camera eye, thermal radiation, in the form of infrared wavelength light, enters, passes through the opening of the pit and strikes the pit membrane located in the back wall, warming this part of the organ.

Due to the extremely high density of these heat-sensitive receptors innervating this membrane, the rattlesnake can detect temperature changes of 0.003 °C or less in its immediate surroundings.

Infrared cues from these receptors are transmitted to the brain by the trigeminal nerve, where they are used to create thermal maps of the snake’s surroundings. Due to the small sizes of the pit openings, typically these thermals images are low in resolution and contrast. Nevertheless, rattlesnakes superimpose visual images created from information from the eyes with these thermal images from the pit organs to more accurately visualize their surroundings in low levels of light. This mechanism helps them not just for seeing but also for hiding better.

Iran in talks with China, Russia lenders on finance hub plan   Iran plans to set up a ...