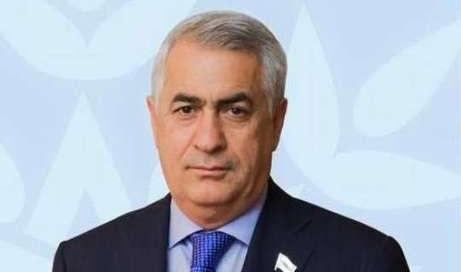 Being a part of the North-South transport corridor the project is aimed to connect northern Europe to South-East Asia.

"We have asked Iran to provide us with the documentation on the project, and we will submit it to the ministries of finance, economy and emergency situations of Azerbaijan," Gurbanov said. "An evaluation will be conducted, and its results will be presented to the president of Azerbaijan. The Azerbaijani side expressed its readiness to provide financial support to Iran in the construction of this section. President of Iran Hassan Rouhani is expected to visit Azerbaijan on August 8-10, and until that time, we will try to prepare the necessary documents and protocols to provide financial assistance regarding this section, and these protocols will be signed between the two countries if the president of Azerbaijan approves them.”

Commenting on the form of financing sources, he mentioned that it depends on the outcome of the negotiations. "It will depend on the conditions of the agreement whether the sources of financing will be in the form of a loan [which will be provided by Azerbaijan] to Iran, whether Iran will attract a foreign loan or it will be a loan attracted within the country," Gurbanov added.

"All the three options are being considered, and the one which suits the two sides will be chosen," he said. "Iran wants the companies of the two countries to work together and on equal rights. However, there are options of working within a joint venture or holding an international tender."

Being a part of the North-South Transport Corridor, the Rasht-Astara railway is constructed with aview to integrate the main transportation lines of Azerbaijan, Iran and Russia. The railway is expected to facilitate and expedite exchange of good and trade between the countries. The volume of freight which is expected to be initially transported ranges from three to five million tons per year and rise up to 10-12 million tons in the future, according to preliminary estimates.

The creation of a direct railway communication along the western coast of the Caspian Sea is expected to contribute to the growth and further development of the transportation market in the region, and become a good motivation for the expansion of foreign economic relations between regional states and European countries.

"The railway will stretch 85 kilometers on the territory of Turkey and this is not a big problem for the country," he said. "The rest work is likely to be finished by late 2016 and we will be able to transport the cargo by diesel locomotives."

Gurbanov stressed that he intends to hold a meeting in connection with the project with Turkish Minister of Transport, Shipping and Communications Ahmet Arslan.

Previously the Baku-Tbilisi-Kars railway route was reported to be commissioned and start cargo transportation in November 2016. The peak capacity of the corridor is expected to be at the level of 17 million metric tons of freight per year.

Being constructed under a Georgian-Azerbaijani-Turkish intergovernmental agreement, BTK is expected to expand multi-modal transportation opportunities and ensure the growth of passenger and freight transportation. The State Oil Fund of the Republic of Azerbaijan (SOFAZ) which is financing the project has already allocated two loans worth $775 million for the construction of the Georgian section.

Commenting on the Great Silk Road project, Gurbanov stressed that while crossing the territory of Russia, Azerbaijan and Kazakhstan, this route is expanding the way to Europe. "The Europe-China trade turnover hits about 100 million tons. But this index will increase," he said.

While commenting on the North-South International Transport Corridor project, the head of the Azerbaijan Railways stated that the first cargo train from India to Russia passing through the territory of Azerbaijan will be launched in late August 2016

"The freight train will take off from India's Mumbai city, then it will be transported by ferry to the Iranian port of Bandar Abbas in late August. Then by railway the train will arrive in Iran's Rasht city" he added.

Gurbanov added that the goods will be transshipped to trucks in Rasht city and delivered to Azerbaijan's Astara city. Gurbanov also stressed that then the cargo will be delivered to Moscow by railway from Astara city. "This multimodal transportation will be carried out together with the railways of Azerbaijan and Russia," he said.

The North-South corridor, from India to Helsinki, with a length of 7,200 kilometers is designed to carry more than 20 million tons per year. It is a multimodal route for transportation of passengers and cargo from Russia's St. Petersburg to the Mumbai port. It is designed to carry transit cargo from India, Iran and other Persian Gulf countries to the territory of Russia (the Caspian Sea) and further - to Northern and Western Europe.

The agreement among Russia, Iran and India on the North-South International Transport Corridor was signed in Saint Petersburg (Russia) on September 12, 2000. Azerbaijan joined the agreement in September 2005.

The main objective of the project which is considered to serve as a link for connecting the railways of Iran, Azerbaijan and Russia is to connect the Northern Europe with South-Eastern Asia. The corridor is expected to reduce the cargo delivery period and transport five million tons of cargo a year in the first phase and over 10 million tons of cargo in the future.

Gurbanov also said that two cargo trains, which will become part of the international railway project 'Viking', will be sent to the Georgian port of Poti from China through the territory of Azerbaijan in late July - early August 2016. He said that major logistics company DHL will be involved in cargo transportation.

"Two trains will be sent from China to Kazakhstan's Dostyk station in late July-early August 2016. From there, the trains will arrive in the Georgian port of Poti via the Trans-Caspian International Transport Route, that is, across the sea and the territory of Azerbaijan,” Gurbanov said.

Combined transport train project Viking was launched in 2003. Participants of the project are Ukraine, Belarus, Lithuania, Latvia, and Bulgaria joined the project in 2012. The total length of the route Ilyichevsk (Ukraine) - Minsk (Belarus) - Draugyste (Lithuania) is 1,766 kilometers.

In February 2016, Ukraine and Lithuania signed a memorandum on the accession of the container train 'Viking' to the Trans-Caspian International Transport Route from Europe to China through Azerbaijan and Kazakhstan. The participation of Azerbaijan Railways in the Viking project is considered to extend the container train route to more distant Asian countries.