Russian-Iranian alliance in Syria at crossroads Political and military events 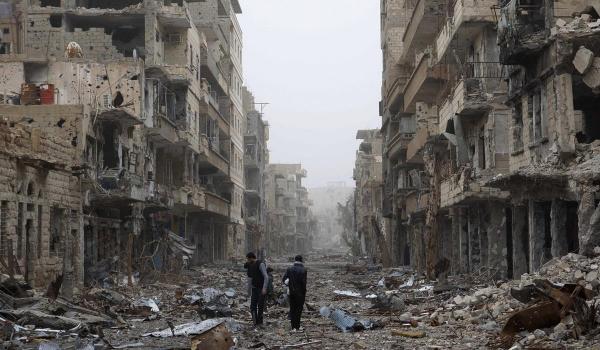 The meeting of the defense ministers of Iran, Russia and Syria at Tehran last Thursday raises more questions than answers. Why did Iran think it necessary to take such an initiative at this point?

Almost everything we know about the event is attributable to the Iranian Defense Minister Gen. Hossein Dehqan who was extensively quoted by Iranian media.

Dehqan underscored that the meeting in Tehran took stock of the conflict in Syria from a strategic perspective. He made the following key points:

The Tehran meeting took place against the backdrop of rumors that Russian and Iranian approaches to the Syrian situation are not converging. Some recent reports in the Iranian media even voiced criticism that Russia has been slackening in its military operations of late in Syria.

On the other hand, Moscow has divulged very little regarding the meeting in Tehran. The Russian Defense Ministry merely said the meeting discussed “priority measures to strengthen cooperation” against the extremist groups and “security initiatives” aimed at preventing the Jihadi groups from “conducting wider operations.”

However, four days after the Tehran meeting, on June 13, Russian news agency Sputnik carried an intriguing commentary analyzing the balance of forces in Syria.

It highlighted that Syrian government forces are overstretched and any expectations of an imminent military victory in Raqqa or Aleppo must be discounted. The commentary gave the following assessment on Raqqa:

In a somewhat similar assessment on Aleppo, the commentary noted that the best units of the Syrian forces are already committed on the Raqqa front and the communication networks and supply lines are thinly stretched in Aleppo.

The commentary warned that the offensive on Raqqa may make good propaganda but its takes heavy toll in time and resources, and, in the meanwhile, there are several other fronts “where the situation may deteriorate any moment.”

Coming within a week of President Bashar al-Assad’s gung-ho speech in the Syrian parliament in Damascus last Wednesday where he called for a total military victory, the Russian commentary amounts to a sober reality check.

It stands to reason that Moscow does not share the enthusiasm and confidence exuded by Tehran and Damascus about the overall ground situation. Plainly put, Russia is hedging, while Damascus and Tehran are raring to go.

The Russian preference for a ceasefire is understandable. Iran and Syria, on the other hand, are of the view that the ceasefire only helped the opposition to recoup and regain some lost territories.

Indeed, it is only Russian support that enabled the Syrian government to consolidate its control over much of Damascus, Homs and Hama and gain control over territories around Aleppo. The regime cannot hope to deliver a decisive blow to the opposition except in the western regions of the country.

Equally, Russia will be called upon to bear the cost of any attempt by the Syrian regime and its allies to gain control of the entire country. Moscow is showing reluctance to shoulder that burden.

From Dehqan’s remarks, it appears that Tehran is wary about the working relationship Moscow has been maintaining with the US and Israel. Moscow, on the other hand, is using the discussions with the US to institute stronger mechanisms for reporting and enforcement of ceasefire.

Moscow is also actively promoting communication links between the government and opposition commanders so as to de-escalate the conflict at a local level.

In other words, Russia’s focus is on negotiating an enduring cessation of hostilities, while on parallel track supporting intra-Syrian dialogue regarding the future shape of the Syrian state and so on.

Russia finds it helpful that the US also appears to be de-emphasizing Assad’s exit relative to the immediate goal of a significant and sustained reduction in violence.

The big question is what follows next. Iran and Syria will be extremely wary that the US and its allies may have a Plan B – and Russia may fall into the American trap – whereby the locus might eventually begin shifting toward establishing some sort of a mechanism for enforcing the ceasefire in the form of peacekeeping forces by the external players in the respective areas friendly to them.

Now, the inevitable next step of such a development would be the devolution of local authority to the Syrian factions (government and opposition) in their respective areas of control.

Indeed, there are incipient signs of the politico-military situation moving in such a direction in the absence of a promising peace process as well as the sheer military stalemate.

The recent arrival of British and French special forces could well be in anticipation of such a decentralization process that is likely on the anvil.

Of course, Tehran and Damascus will see this as defacto partition of Syria by the external powers amongst their proxy factions, and will not accept it. Moscow seems to be procrastinating.

Of course, from the Russian viewpoint, working with the US holds the tantalizing prospect of opening up a broader dialogue with Washington to ease the tensions in the relations between the two countries.

To quote Stratfor, “The White House has been receptive to a tactical coordination here and there with Moscow, but Washington does not feel particularly compelled to make substantial concessions to Russia (on issues other than Russia).”  Nonetheless, Moscow pins hopes that US-Russian coordination would become unavoidable at some point.

All in all, Iran appears to have felt the urgency to ring the alarm bell that all three – Russia, Iran and Syria – have no real choice but to swim together. It remains to be seen whether Moscow heard the bell tolling in Tehran last Thursday.

Ambassador MK Bhadrakumar served as a career diplomat in the Indian Foreign Service for over 29 years, with postings including India’s ambassador to Uzbekistan (1995-1998) and to Turkey (1998-2001). He writes the “Indian Punchline” blog and has written regularly for Asia Times since 2001.