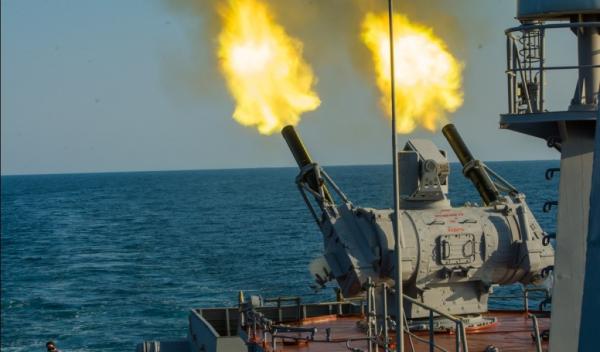 Kazakhstan is teaming up with German, Turkish, and Spanish firms to boost its Caspian naval forces, the Ministry of Defense has announced.

The MoD signed a memorandum of intent with the German firm Abeking & Rasmussen for the delivery of corvettes for Kazakhstan's navy. The two sides also discussed establishing a ship-building facility in Kazakhstan. "We are ready to cooperate with the Armed Forces of Kazakhstan and support the establishment of shipbuilding. Our aim - to create in Kazakhstan a modern shipbuilding enterprise, so it can compete at the global level and contribute to quality production," said Thomas Haake, sales director of Abeking & Rasmussen, according to an MoD press release.

In addition, the MoD also signed a memorandum of understanding with Turkish shipbuilder Dearsan to provide corvettes, and with the Spanish company SEAS to jointly produce naval mines in Kazakhstan. It's not clear what the relationship between all of these deals is, in particular the apparent similarity between the German and Turkish deals; none of the companies or the MoD responded to requests for clarification.

A report in the Turkish defense magazine C4 Defence gives some more details about the Dearsan deal: they will be similar to the Tuzla-class patrol boats that Dearsan has produced for the Turkish navy, and their Kazakhstan designation will be "Nur-class." They are designed for air defense, surface warfare and anti-submarine warfare, and also will be able to lay mines. Dearsan said it will build the ships in Kazakhstan and use as many local components as possible. (Dearsan, incidentally, is already producing similar ships in and for Turkmenistan; the third such ship was launched May 27 by President Gurbanguly Berdymukhammedov himself.)

With the caveat that none of these deals are binding (and Kazakhstan has made many more announcements about intentions to buy ships than actual ships bought), they do seem to suggest a renewed focus on Caspian security. It's particularly interesting in light of Kazakhstan's evident concern about Russia's increasingly proprietary stance toward the Caspian.

All the deals were announced at KADEX, Kazakhstan's fourth biennial defense exposition, which took place in Astana from June 2-5. Kazakhstan's multi-vector approach to building up its armory and its defense industry was again evident, as deals were signed to sell Kazakhstan-manufactured ammunition to Bulgaria, the United Kingdom, and the United Arab Emirates; procure and service helicopters from Belarus, Russia, and Ukraine; and joint production of ammunition with China.