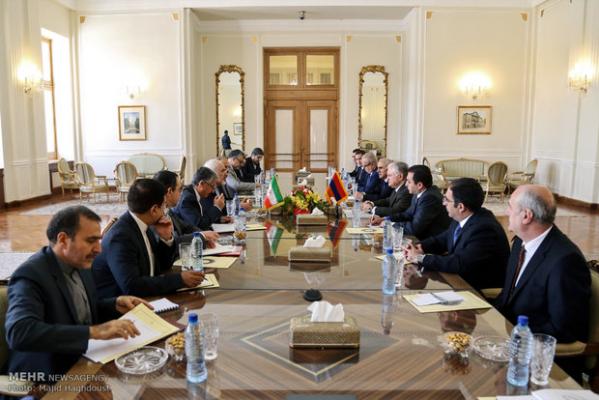 Mohammad Javad Zarif and Edward Nalbandian met and discussed bilateral and regional issues of interest on Sunday. Zarif believed that Tehran-Yerevan ties would contribute to regional stability and peace; “both countries would promote cooperation in international community, and we would offer help in solving Nagorno-Karabakh conflict with Republic of Azerbaijan. We recommend both sides to exercise self-restraint in the matter so that they sit to negotiate in peaceful terms,” he added.

Zarif also pointed to signing an extradition of convicts deal with Armenia and also environmental cooperation, with further improvements wrought by signing of visa-free visits by Iranians and Armenians to two countries which Zarif believed would greatly help trade and tourism in both sides of the border.

About easing of restrictions on Iran’s banking transactions with the world, Foreign Minister Zarif criticized the US for failing to take practical measures while Iran had attended its quota of commitments.

Nalbandian for his part believed that his government saw ties with Iran in positive and friendly light, and both countries had diversified their cooperation during past 3 decades of conception of Armenia as a republic, with energy and economy being areas of greater interaction to create new opportunities in trade.

Nalbandian lavished praise on Iran’s role in conflict with Republic of Azerbaijan and country’s call for both sides to equanimity; “as a great country of influence, Iran would not remain untouched by conflicts in the region and we hope to have Iran’s contribution in Minsk Group talks in promotion of peace,” he added.

He welcomed trilateral and multilateral cooperation with other countries in gas, electricity, and transportation. Nalbandian also said his country would welcome setting agreed-upon tariffs on certain goods to promote trade with Iran.

The environmental concerns which remained unnoticed by Zarif in the meeting was Armenian industrial waste drained directly to the river Araxes, which has devastating effects on the Caspian Sea ecosystem as a shared body of water to which Armenia is not a partner; however, the impacts of industrial unregulated activity are evident in the environmental pollution of the Caspian Sea. Mr. Zarif would have addressed the issue with Nalbandian through mounting pressures to the country to address the issue more responsibly.