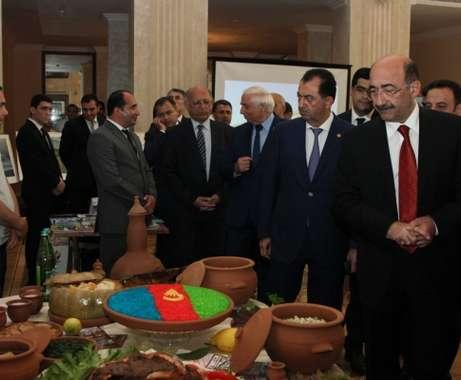 Azerbaijan’s Lankaran region, known for its diverse natural wealth, was presented in Baku on June 6 as part of the “From the regions to the capital” project.

Organized by the Baku Culture and Tourism Department, the event sought to familiarize Azerbaijanis as well as foreign tourists with the country’s rich culture and tradition.

Firstly, the event’s guests got acquainted with the exhibition, deployed in the Drama Theater’s lobby and displaying stands reflecting history, rich culture, socio-economic development, and tourism potential of the picturesque region.

Speaking at the opening ceremony, Culture and Tourism Minister Abulfaz Garayev and Taleh Garashov, Head of the Executive Power of Lankaran talked about the ongoing work aiming at developing the socio-economic sphere and the tourism potential of Azerbaijan's regions.

Lankaran is one of the oldest settlements in Azerbaijan and archeologists confirm that the area was inhabited starting from the Bronze Age.

Because of the linkages between the East and the West such as the Silk Route, Lankaran continued to grow as a major stopover point for caravan routes.

Lankaran is also one of the brightest and most beautiful regions of the country. Exquisite architecture, wonderful climate and magnificent landscapes are the hallmarks of the region.

It occupies the east coast of the Caspian Sea and whole Lankaran lowlands up to Talysh Mountains. On the local shore of the Caspian Sea there are many fine sand beaches. Wet subtropical climate without harsh winters, dry and hot summer and rainy autumn underlie the richness of the local flora and fauna.

Agriculture is the most developed sector in the region. The fertile soil of the region is ideal for growing citrus fruits, rice, grapes, tobacco and tea-growing. The region is a home of Azerbaijan's first tea plant, built in 1937.

One of the main attractions of the city is the Lankaran fortress built in the 18th century. Earlier here there were two bazaars, but at the beginning of the 20th century, mosques were built here.

Another attraction of the city is the lighthouse of the 18th century. Once the Caspian Sea level was much higher, the water came up to the lighthouse. Gradually, the coastline retreated, and now you should move almost half a kilometer from the lighthouse to the sea.