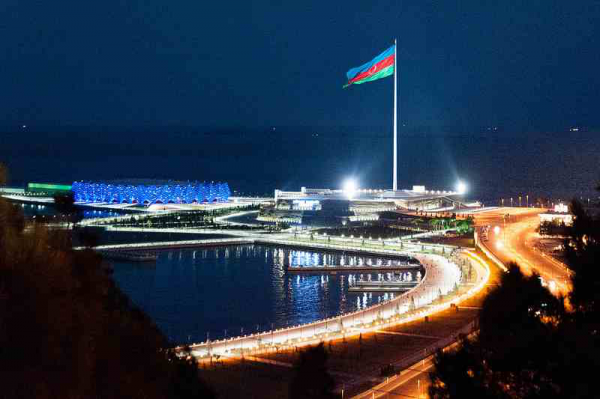 Throughout its history, Azerbaijan has played an important role in bridging East and West through connecting Central Asia with Anatolia, the Black Sea and beyond. Situated on the west coast of the Caspian Sea and at the feet of the Caucasus Mountains, the country has been a pivotal point in the connection of civilizations since ancient times, welcoming merchants from across land and sea, said in an article of Fuad Isgandarov, the Head of Mission of Azerbaijan to the EU, Ambassador to Belgium and Luxembourg, posted on the website of Diplomat magazine.

"Traditional east-west corridor is now reinforced by huge energy infrastructure projects initiated by Azerbaijan. Azerbaijan as an enabler and contributor to the European energy security is investing on new pipelines and sophisticated interconnections across the region pledging to bring billions of cubic meters of natural gas volumes through Southern Gas Corridor", the author says.

According to him, this multibillion dollar project has been inspired by successfully realized regional oil and gas pipelines such as Baku-Tbilisi-Ceyhan and Baku-Tbilisi-Erzurum, backbones of long-term diversification strategy of Azerbaijan.

"The long-term perspectives of contribution of Azerbaijan to the development of east-west corridor cannot be entirely attributed to trans-regional oil and gas infrastructure projects. Baku-Tbilisi-Kars railway project which is to be operational by the end of this year is widely acknowledged as an inherent component of revived Silk Road initiative. This railroad will join the ranks of the region's most critical infrastructures once China's Silk Belt concept comes to the fruition", Isgandarov says.

The author notes, that the geostrategic location has become a more valuable asset for modern Azerbaijan positioning the country as a vital centre for the exchange not only of goods and merchandise, but of ideas, customs, religions and cultures. Azerbaijan, a predominantly Shiite Muslim country, is also home to several other ethnic and religious groups, including ancient Zoroastrian, Christian, and Jewish communities.

"Respect and tolerance for national minorities has played a vital role in the development of the country from antiquity to the days of the Silk Road to modernity. Today multiculturalism, religious tolerance is more than a state policy in Azerbaijan; it is a reflection of the mood of the society", the ambassador notes.

"Today practical role assumed by Azerbaijan in addressing common pressing challenges in Europe and beyond positions the country as a crucial partner in the region. It should be emphasized that unlike others Azerbaijan has never been a burdensome partner or a troublemaker in its relations with the European Union.

Quite the reverse, its engagement and partnership with the EU aimed at contributing to the realization of the latter's strategic objectives. These objectives are not limited to securing future alternative gas volumes through Southern Gas Corridor but fighting against growing threats, such as radicalization, religious extremism which can be easily translated into deadly acts perceived as crimes against humanity", said in the article.

Azerbaijan with its vibrant multicultural society is ready to work with its European partners through exchange of its centuries-long experience in tackling imminent challenges, the author says.

"New geopolitical developments and complexities in the EU neighborhood will shape its future relations with Azerbaijan. It is due to these circumstances the EU and Azerbaijan have decided to upgrade their bilateral contractual relations which will reflect the strategic spirit of long-term engagement.

The EU-Azerbaijan cooperation is not only bound to the critical infrastructure related projects. The success of Southern Gas Corridor will create more interdependency in the relations. This interdependency is capable to manifest itself in deepening political dialogue and further opening trade perspectives", noted in the article.

Unfortunately, ongoing occupation of the territories of the Azerbaijan by Armenia keeps posing threat the peace and prosperity in the region. The persistent presence of Armenian armed forces in occupied Nagorno-Karabakh and 7 adjacent regions despite the relevant UN Security Council Resolutions demanding unconditional and immediate withdrawal of occupying forces from these territories is a source of instability and frequent outbreaks of deadly military confrontations along the line of contact, Isgandarov says.

"The recent provocative acts by Armenian armed forces in April 1 sparked tensions in the frontlines and triggered adequate military response of Azerbaijan. Though ceasefire deal has always been fragile so far, this time the conflict has experienced an unprecedented confrontation", the ambassador notes.

As reasons for what is happening the author sees the successful meetings of the Azerbaijani leadership with foreign partners. "Azerbaijan hosted second meeting of Advisory Council on Southern Gas Corridor in 29 February which was attended by EU vice-president Maros Sefcovic and joined by EU High Representative Federica Mogherini. Both vice-presidents in Baku reconfirmed the EU's full political support and solidarity in timely realization of this project. Azerbaijan and its European partners set date to hold a groundbreaking ceremony of Trans-Adriatic Pipeline, a downstream component of Southern Gas Corridor in May. High Representative also retains the tone and emphasis of the EU's clear position on explicit support of territorial integrity, independence and sovereignty of the Republic of Azerbaijan.

In the beginning of April President of the Republic of Azerbaijan paid a visit to the US and held fruitful meetings with US leadership in Washington where the latter expressed support to the territorial integrity of Azerbaijan and also hailed Azerbaijan as a crucial partner addressing key challenges in the region", said in the article.

"Feeling more abandoned and isolated in the region with an attempt to sabotage these developments Armenia launched unprecedented military provocations along the frontline. It was unprecedented because military operations directly targeted civilians living in the frontline areas as well as critical regional infrastructure projects", the author says.

According to Isgandarov, one fact should not be dismissed - "Azerbaijan's counter military operations did not take place in Armenia-Azerbaijan border. Azerbaijan armed forces fought in the occupied districts surrounding Nagorno-Karabakh region".

NATO-Russia: No "business as usual"

NATO-Russia: No "business as usual" DIPLOMACY NATO and Russia held "frank and serious" talks despite "profound disagreements" as their ambassadors met ...