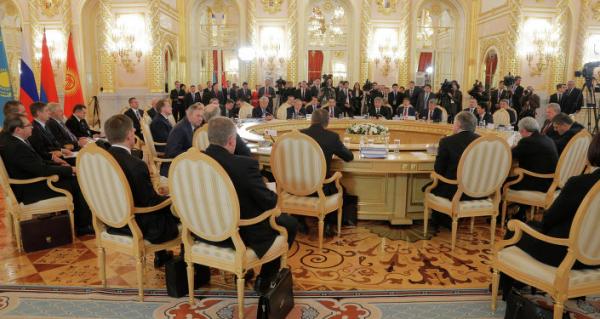 At the first round of negotiation between Trade Promotion Organization of Iran led by Ziaei Bigdeli and officials of Eurasian Economic Union in Moscow, the two parties reviewed feasibility studies to initiate free trade.

The meeting was held in the context of a decision made by the Eurasian Economic Union on May 16 to begin free trade talks with Iran.
Minister in charge of Trade of the Eurasian Economic Commission Veronika Nikishina at the end of the 2-day negotiations, called for necessary outcomes from the talks.
In the meeting, the two sides underlined necessity to end feasibility study and sign agreement to finalize the preparatory works for free trade.
Deputy Prime Ministers of five member states of EEU decided in May to usher in negotiations with Iran and upon declared program and permission by heads of member states of EEU, the final text of the agreement to be signed and put into practice.
Iran and EEU already agreed to export eight items including Pistachio, Cauliflower, Broccoli, date, different types of raisin to the EEU member states by zero tariffs.
Eurasian Economic Union with population of more than 180 million included five countries of Russia, Belarus, Kazakhstan, Kyrgyzstan and Armenia, which are geographically close to Iran and would be a big market for export of Iranian goods and may create plenty of opportunities for private sector of Iran and the EEU states.

V.Filanovsky jacket departs Astrakhan for Caspian Sea   Transportation has started of a jacket for the offshore ice-resistant ...

During a government meeting President of Turkmenistan Gurbanguly Berdimuhamedov stressed the importance of resolving the tasks of the fuel ...