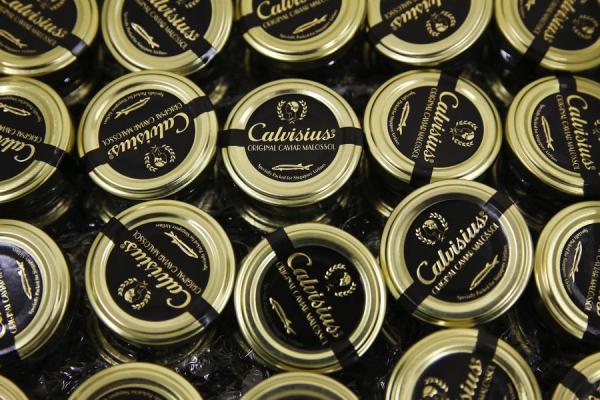 Abu Dhabi-based Emirates Aquatech is targeting caviar production of 35 tonnes per year as it awaits clearance from the European Union to export the prized product to Europe and increase its market share.

“The UAE needs to fulfil certain requirements to export fish products to EU. Once it is done, we will have a thriving business of caviar export to the European Union,” Ahmad Al Daheri, Managing Director of Emirates Aquatech, told Gulf News at the sprawling facility located in the Musaffah industrial area.

“We expect the clearance to be given in a year or two. Our file is already with the EU.”

The present caviar production of the company is about 4 tonnes per annum. Its customers in the UAE are mainly private consumers, restaurants and corporate such as Etihad Airways. Export markets include Japan and Australia.

In the UAE, Emirates Aquatech’s Yasa brand, costs about $200 for a 100-gram tin and the higher quality products command a higher price.

Caviar is produced from Sturgeon, which is mostly found in the cold waters of the Caspian Sea. Al Daheri has created similar conditions in the farm for the fish to breed.

The facility is automated with special chillers in place to maintain the temperature at a minimum level of 17 degrees centigrade.

About 300,000 Sturgeons are being bred in the farm lined with dozens of tanks and basins.

The company invested Dh420 million in building the plant and plans to spend more once they expand their market share and export the product to other countries.

The fish farm was constructed three years ago with technology imported from Germany, Al Daheri said.

“Initially we were hesitant as we had our own doubts and people were saying we were crazy. As the project bore fruit and fish came out, we were amazed. The dream became a reality,” he said while walking through the 56,000 square meter facility.

Emirates Aquatech’s farm will also give a boost to the diversification process initiated by the UAE government to reduce dependence on oil revenue and focusing on non-oil sectors such as industry, he added.

“The country would be eligible to compete with other countries in the global arena. This is the world’s largest caviar factory in terms of size and technology.”

“Our vision is to become the world’s largest caviar suppliers. We plan to acquire more farms as we move ahead with our strategy.”

Al Daheri said the company is optimistic of making profits once it begins exports to Europe, the biggest market for caviar.

“Nothing is wasted in the factory. Fish meat is sold in the local market. Skin could be turned into leather goods; bones, head and tails can go into fertilisers. Even 90 per cent of water is recycled.”

The company also plans to contribute its mite towards increasing sturgeon numbers in the Caspian Sea.

“One of our main aims is that a select number of fish be shipped from the UAE to the natural habitat in the Caspian sea to show the world that the UAE is concerned about the dwindling population of Sturgeon and our commitment to protect the species and increase their numbers.”

Emirates Aquatech is owned by a group of investors from the UAE and Germany with Al Daheri holding the majority share.

Some 90 sturgeon farms produced an estimated 240 tonnes of caviar in 2014, led by China at 54 tonnes, followed by Italy at 42 tonnes, and Russia third at 40 tonnes, according to data compiled by the Federation of European Aquaculture Producers, Bloomberg reported this month.

Azerbaijan has further reduced cargo tariffs with a view to enhance the competitiveness and efficiency of transit transport corridors passing ...