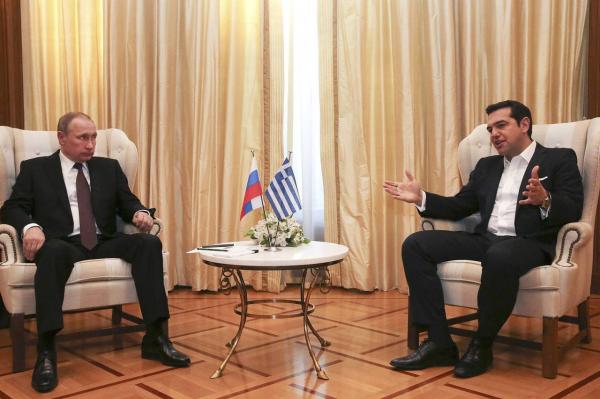 In his first visit to a European Union member nation in six months, Russian President Vladimir Putin traveled to Greece on Friday to discuss energy and privatization deals and to strengthen a traditionally close relationship amid continuing diplomatic tensions with the West.

“Greece can affect the relationships with the European Union,” Mr. Putin said during a news conference with Greek Prime Minister Alexis Tsipras. “But we don’t expect from Greece the Labors of Hercules in the courtyard of European bureaucracy.”

The Greek premier said the close ties his country holds with Russia can help promote relations between Russia and the EU, as well as Russia and NATO.

“Everyone recognizes that there cannot exist a future for the European continent with the European Union and Russia at loggerheads,” Mr. Tsipras said.

The Russian president also warned the U.S. and NATO to stop setting missile systems near Russia, and added that Moscow feels threatened and is ready to retaliate.

Some elements of the U.S. missile shield are being installed in Poland and Romania.

“If yesterday people in these areas of Romania simply didn’t know what it means to be in the crosshairs, then today we will be forced to carry out certain measures to ensure our security,” he said, adding that the same will happen in Poland.

“We won’t take any action until we see rockets in areas that neighbor us,” he said.

He added that the argument that the project was needed to defend against Iran makes no sense, since an international deal has been reached to curb its nuclear program.

During his first visit to Greece after nine years, Mr. Putin was accompanied by a delegation of ministers and businessmen whose companies either already operate in or are interested in Greece. These include PAO Gazprom Chairman Alexei Miller, OAO Rosneft Chief Executive Igor Sechin and JSC Russian Railways CEO Oleg Belozerov.

Talks focused on trade and investment, in particular in energy and transport, and the Russian president openly expressed his country’s interest in taking part in the potential privatization of Greek rail assets and the port of Thessaloniki, a major gateway into the Balkans.

Greece and Russia have flirted with the idea of Athens participating in a pipeline project that would bring Russian gas into Europe via Greece, though little progress was immediately expected.

Mr. Putin trip to Greece comes 10 days after the inauguration of the Trans Adriatic Pipeline bringing gas into Europe from Azerbaijan, an international project that rivals Russia’s gas-export ambitions. It is intended to bring natural gas from the Caspian Sea, easing the region’s reliance on Russian gas.

In recent years Russia has responded to the project by proposing alternative pipelines that would promote its energy interests in Europe’s southeast, such as South Stream, which has been frozen after Bulgaria stepped back.

The Russian president blamed the U.S. and Brussels for that, arguing they had pressured Sofia to withdraw. But he added Russia plans to move ahead with an extension of its Nordstream pipeline in the Baltic, and hopes no one would try to hinder that.

Russia is also trying to promote a direct competitor to the Trans Adriatic Pipeline, IGI Poseidon, a pipeline project driven by Russian gas giant Gazprom aimed at bringing Russian gas via Turkey, or possibly Bulgaria, to Greece and onward to Italy.

Greek officials said the Poseidon project featured in Friday’s discussions, but talks could make little progress because of poor relations between Turkey and Russia.

Greece has kept close relations with Moscow even after the EU imposed economic sanctions in the summer of 2014 in response to Russia’s annexation of Ukraine’s Crimea region and its support for separatists in eastern Ukraine. Russia has denied Western charges that it supplied and directed the rebels.

“Greece has repeatedly said that the vicious circle of sanctions is not productive,” the Greek Prime Minister said, but added Greece will stick to the commitments it has as a member of the European Union.

Athens has repeatedly voiced reservations about the EU sanctions, but hasn’t blocked them. The sanctions expire in July, but are expected to be extended. Russia has imposed countersanctions on the West, including a ban on agricultural products that extends to Greece.

“As far as Crimea is concerned, we consider this question is closed forever,” Mr. Putin said. “Russia will not have any discussions with anyone on this subject.”

Mr. Tsipras visited Moscow twice in 2015 at the height of Greece’s clashes with its European creditors. Syriza officials last year used the visits to hint that Athens has friends beyond Western Europe, whom it could turn to if Greece were expelled from the eurozone.

Russia, however, never offered Greece a realistic alternative to the financing that Athens needs from Germany and other eurozone countries.

On Saturday, Mr. Putin is due to visit a monastic community at Mount Athos in northern Greece. The Russian Orthodox Partriarch of Moscow will also be present to mark 1,000 years of Russian presence on Greece’s holy mountain.