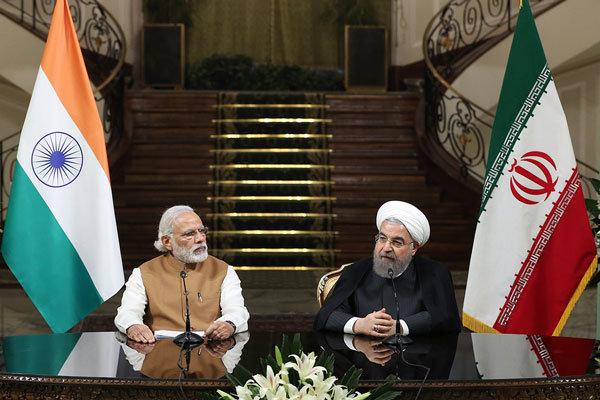 Iran’s President Rouhani and the Indian PM Modi have emphasized on boosting ties between the two countries.

Speaking at a joint press conference with the visiting Indian Prime Minister Narendra Modi on Monday in Tehran, President Hassan Rouhani welcomed the Indian delegation to the Islamic Republic of Iran.

“Iran holds traditional relations with India and today we have the opportunity to further boost bilateral relations to the interests of both sides,” he said.

Rouhani emphasized that the Indian PM’s visit follows the momentous nuclear deal between Iran and the 5+1 group of countries as well as the removal of international sanctions; “now the grounds are prepared for expansion of ties between the two states.”

“During today’s meeting, it was decided that the relations between the two countries should not be limited to traditional trade exchanges as they can be promoted to full-fledged ties,” stressed Rouhani highlighting that Iran and India are two major and significant countries holding large populations of people.”

The Iranian President further noted that “given the existence of rich energy resources and ports like Chabahar in Iran, many important industries like petrochemicals be developed in collaboration with India.”

“With the investment on development of Chabahr port, the Iranian port can mark the symbol of cooperation between the two great countries of Iran and India,” commented the official.

Rouhani also stated that “Chabahar port marks the origin of International North-South Transport Corridor as well as that the construction of Chabahar-Zahedan-Sarakhs railroad can serve as a point of connectivity amongst different countries including India, Russia, Iran with Europe and Central Asia.”

Touching upon the importance of banking ties in the relations between the two sides, Iran’s Rouhani said “the issue was discussed at the meeting hoping that bilateral economic relations will improve accordingly.”

“Since India possesses numerous advantages in areas of new technologies like nanotechnology and aerospace, it was decided to deepen relations between academics and research centers of both parties,” underlined Hassan Rouhani.

“Considering the great number of cultural commonalities between the Iran and India especially the interest they hold in each other’s languages, courses on Persian and Indian languages will be held in two countries which in turn will boost the tourism industry,” maintained the Iranian President.

Rouhani also touched upon the importance of stability and security in the region, especially in countries like Iraq, Afghanistan, Syria and Lebanon saying “because terrorism is threatening regional countries, we agreed to conduct closer relations in the fight against terrorism.”

The Indian PM Narendra Modi, for his part, voiced satisfaction towards Iran’s hospitality on behalf of Indian people and thanked the Iranian President for receiving him and his accompanying delegation.

Modi also appreciated the culture of Iran noting that the trip to Iran marks great privilege; “Iran and India hold long-lasting friendship since centuries ago as they share numerous cultural ties.”

“Iran and India have been on each other’s sides even in times of difficulty,” stressed the official pointing out that he was impressed by the dignity and personality of Iran’s Leader during an earlier visit.

The Indian official explained that “during today’s meeting, several bilateral issues were discussed as the issues pertaining to the two countries as well as to the region were dealt with.”

“Iran-India cooperation was raised at the meeting and the outcomes of the meeting will exert effects on the ties between the two sides,” said the official highlighting “it was decided to run extensive trade cooperation in railroad industry as well as partnership in oil and gas industries as well as educational and technical fields.”

Modi further said “the bilateral contract to develop Chabahar port, as a major effort to boost bilateral economic ties, will lead to economic prosperity of the region and we hope the deal will soon become operational.”

“Also, a trilateral agreement was sealed on goods transportation among Iran, Afghanistan and India which marks a historic deal opening a new window to the ties between the three states,” he added.

The Indian official went on to add that Iran plays a major role in security and stability of the region and since we share concerns over extremist and terrorist groups, we agreed to cooperate in the fight against Takfiri groups.”

“It was also decided to boost ties between defense and security organizations of the two countries since bilateral cooperation between Iran and India has always been strong through history,” stressed Modi noting “continuous friendship between the two sides will lead to peace in the region.”

“I am scheduled to meet with Iran’s Leader to further discuss grounds for boosting bilateral ties,” underlined Modi before officially inviting Iran’s Hassan Rouhani to make a visit to India.