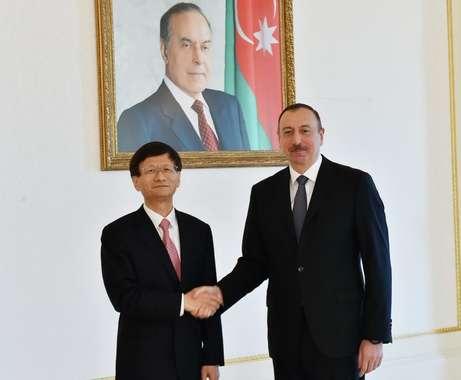 Economic ties between Azerbaijan and China play a large role in the bilateral political relationships. The two share a common interest in boosting the collaboration and partnership, as the rapid rise of China and Azerbaijan, and the growing integration between them, has a clear boost for regional projects.

The expansion of cooperation in the areas of law-enforcement and security could contribute to further strengthening of the bilateral relations, believes President Ilham Aliyev.

The Azerbaijani leader sounded this statement in a meeting with a Chinese delegation led by Meng Jianzhu, a special envoy of the Chinese President, member of the Politburo of the Communist Party, Secretary of the party`s Central Political and Legal Affairs Commission in Baku on May 22.

The delegation included senior officials of all law-enforcement and security bodies and the Foreign Ministry.

Emphasizing that the bilateral cooperation covered many spheres, President Aliyev noted that relations between Azerbaijan and China were successfully developing in political, economic, transport, trade and humanitarian areas.

The head of state noted that national leader Heydar Aliyev played an exceptional role in the establishment of fundamental principles of bilateral relations between Azerbaijan and China.

Emphasizing that China was a friendly and fraternal country for Azerbaijan, President Aliyev said that development of ties with China was among key foreign policy priorities of Azerbaijan.

Azerbaijan attaches serious importance to all-round cooperation with the Asian countries as much as with the Western ones. Azerbaijan, which is capable of playing a role of a bridge, in a broad sense of a word, between East and West, is keen on cooperating with China in all directions.

In a speech to the Chinese delegation, the president praised the bilateral political ties and noted that Azerbaijan was interested in having more Chinese companies involved in its economy and expanding tourism cooperation.

President Aliyev also pointed to good prospects for cooperation in transportation of goods by railway from China to Europe passing through Azerbaijan, adding that active work was conducted in this regard.

“The Armenian-Azerbaijani Nagorno-Karabakh conflict must be solved in accordance with norms and principles of international law, within Azerbaijan`s territorial integrity,” the president said, once again reminding that this conflict poses a threat to regional security.

China joined the top 10 of largest trading partners of Azerbaijan for the first time in 2015. To date, the volume of Chinese investment projects in Azerbaijan, which started realizing since 2002, has already reached $300 million.

Alternative energy sources, as well as tourism and agriculture are the main areas of cooperation between China and Azerbaijan. The sides have repeatedly discussed potential for development of cooperation in such areas as cotton growing and livestock.

The Chinese delegation in their turn said they wanted the conflict to be solved peacefully. Jianzhu said his country respected Azerbaijan`s efforts to ensure its territorial integrity.

Meng Jianzhu, apprising the bilateral relations, for his part emphasized that China was interested in expanding cooperation with Azerbaijan in the fields of security, law-enforcement, fight against terrorism, transnational economic crimes, cybercrimes, as well as in ensuring security along the Great Silk Road.

He pointed out that cooperation in the field of security could contribute to regional cooperation, describing the Great Silk Road project as a promising one.

Jianzhu further hailed the Azerbaijani president`s state visit to China as successful, saying important documents on the expansion of cooperation were signed during the visit.

Azerbaijan and China opened a new page in their relations after President Ilham Aliyev visited China in December 2015. During the visit, several meetings, negotiations were held and 10 documents were signed. Cooperation issues almost in all spheres were discussed.

The special envoy emphasized that the main goal of the Baku visit was to give impetus to the execution of agreements achieved by the heads of state during president Aliyev's state visit to China. The special envoy said that prior to visiting Azerbaijan he met with President Xi Jinping, who described Azerbaijan as a beautiful country and expressed his desire to visit it.

The head of state invited Xi Jinping to pay an official visit to Azerbaijan at his convenience.

China is a huge opportunity and a priority market for Azerbaijan. More than 50 agreements were signed between the two countries so far. Azerbaijan Export and Investment Promotion Foundation (AZPROMO) has recently opened a representative office in China to support and encourage relations between the two countries’ businessmen, as well as expand Azerbaijani goods export to the Chinese market and attract China's leading investment funds to the Azerbaijan economy.

The trade turnover with China reached $565.1 million last year, while its unit weight in the total trade turnover of Azerbaijan amounted to 2.74 percent, according to the Azerbaijani State Customs Committee.

Miankaleh: A Heavenly Sanctuary in Iran

IIKSS- Miankaleh peninsula is a narrow but long peninsula (48km long and between 1300-3200 meters wide), in Mazandaran ...