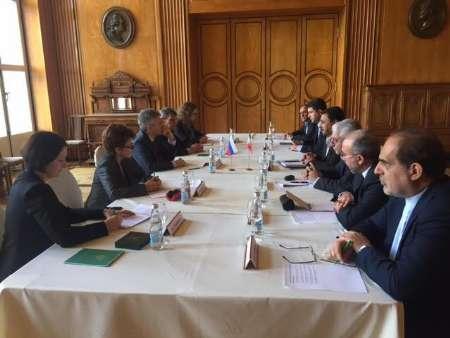 Iran and Russia agreed on forming arbitration and advisory center in trade affairs based on which both countries would be able to expand cooperation in post-JCPOA era.

Deputy Minister of Justice in Human Rights and International Affairs Mahmoud Abbasi and his Russian counterpart Maxim Trovinco in a joint Conference held on the sidelines of the Meeting of Ministers of Justice of the SCO Member States in St. Petersburg agreed on forming arbitration and advisory center in trade affairs.

Both sides emphasized expanding judicial and legal relations between Iran and Russia, the media diplomacy department of Iran's embassy in Russia reported.

Abbasi reiterated that holding seven meetings between Iranian and Russian Presidents and the Supreme Leader of Iran provided a satisfying condition in both countries' relations.

He said that the implementation of the Judicial and Legal Assistance Treaty in civil and criminal matters which was signed between Iran and Russia Presidents has been procrastinated.

The treaty is to be inked in Russian Minister of Justice Alexander Konovalov's trip to Tehran.

Head of Tazirat (reprimand) Organization Alireza Jamshidi together with an Iranian delegation went to Russia to participate in International Legal Conference and the 2nd Conference on Scientific and Practical Legal Arbitration in Russia.