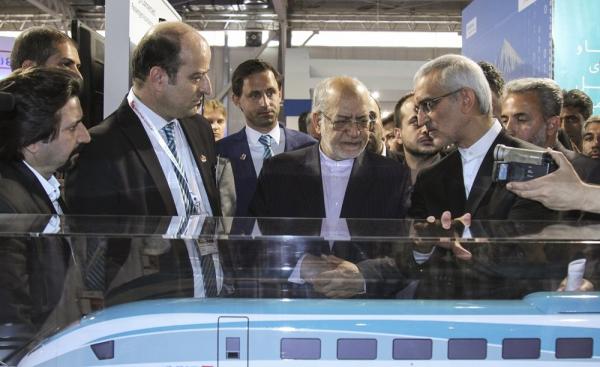 The 4th International Exhibition of Rail Transportation, Related Industries and Equipment of Iran, dubbed RAILEXPO 2016, and the first international conference titled “Rail-Ports and Rail-Oil” opened in Tehran on Sunday.

Representatives from many international bodies in the rail industry such as the International Union of Railways and the Intergovernmental Organization for International Carriage by Rail are participating in the two-day conference.

Addressing the conference, Mohsen Pour Seyed Aqaei, the head of Islamic Republic of Iran Railways (IRIR), said transportation through railway rose 100 percent in Iran over the past Iranian calendar year 1394 (March 2015-March 2016) from its previous year and also in 1393 from its preceding year.

Being located en route the Silk Road, Iran has had a strategic role in transportation since 3,000 years ago, the head of IRIR further highlighted.

Railway connects the Caspian Sea in the north of Iran to the Persian Gulf in the south, Pour Seyed Aqaei mentioned, stressing, “We should connect our railway network to those of our neighboring countries as well.”

During the same event, Transport and Urban Development Minister Abbas Akhoundi said “Making connectivity between other countries via air, road and rail is one of our main policies in the ministry.”

“We should connect our railway to China, Moscow in Russia and Helsinki in Europe,” the minister added.

“Railway is a sector in which we could have a very fast growth,” the official asserted.

Many noticeable measures have been taken recently in Iran in all parts of the railway sector, including signaling and also launching high-speed trains, Akhoundi announced.

Addressing the same conference, Industry, Mining and Trade Minister Mohammadreza Ne’matzadeh said the removal of sanctions provides the country with the best opportunity to boost its international cooperation.

The minister emphasized the need for joining the global chain of business given the new environment created in Iran in the post-sanction time and which has led to the presence of more foreign companies in the country under these circumstances.

At the end of the event, Akhoundi inaugurated RAILEXPO 2016, which is participated by 150 Iranian and 130 foreign exhibitors from 17 countries including Russia, Germany, Britain, Switzerland, France, Italy, the Netherlands, Turkey, China, the Czech Republic, Bangladesh, and India.

The chief of staff of Iranian president has arrived in Ashgabat this morning atop a high-ranking politico-economic delegation. Vaezi ...