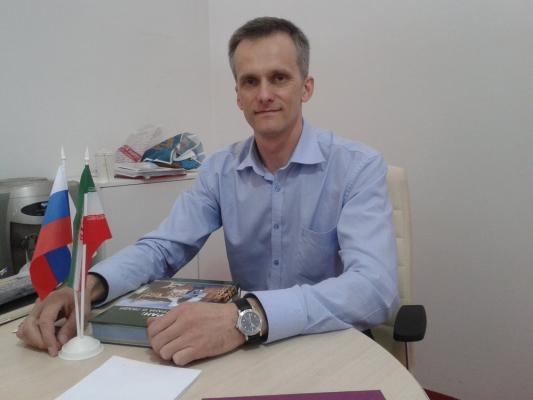 With the 29th Tehran Intl. Book Fair just wrapped up, Mehr News conducted an interview with Sergey Kaykin, head of Russia's International Book Exhibitions and Fairs, who represented Russia stand as the guest of honor of TIBF 2016.

Russian literature with its frequent themes of suffering and sadness has always been wide-read by the Iranian book lovers. Leo Tolstoy, Fyodor Dostoevsky, Anton Chekhov and Alexander Pushkin are as familiar a name to the Iranian readers as Hafiz, Ferdowsi or more contemporary Persian novelists such as Sadegh Hedayat or Simin Daneshvar. But perhaps, it will not be too off the mark to say that Russian contemporary literature has been largely eclipsed and neglected in Iran’s intellectual circles. Tehran International Book Fair 2016 has sought to remedy that.

Now in its 29th edition packed with three decades of experience and reputation, Tehran International Book Fair had chosen Russia as the guest of honor, a country whose vast reservoir of rich literature has long fascinated the Iranian readers with tales of human alienation, great suffering, and philosophical and psychological questions.

Iran-Russia relations date back to the 16th century. Such historical ties intertwined with a long-standing tradition of cultural, political and social interactions give both countries even more reason to step up cooperation in as many fields as possible. It may come as a pleasant surprise for us Iranians to know that Russian President Vladimir Putin, who is one of the most influential people in the world, has listed a book of poetry by Persian poet and mathematician Omar Khayyam among his top nine favorite books. Russia also published in 2008 the first edition of ‘Khayyam and Putin’, a book containing Putin's favorite quatrains written by Khayyam and some of the Russian's interviews with news networks around the globe regarding his admiration for the Persian poet.

“...the history of our countries [Iran and Russia] and the interaction of our cultures goes much deeper and has much stronger roots than specialists sometimes think. This is the guarantee that we will always find a way of solving any problems that arise, because we understand each other,” President Vladimir Putin had once said in an interview in 2007.

To find more about Russia’s programs for the 29th TIBF, I had a short discussion with the General Director of Russia's International Book Exhibitions and Fairs Sergey Kaykin, who believes that the presence of Russia in Tehran Book Fair can serve as a turning point in the two countries’ relations and help them better reach a common understanding on the cultural ground.

Russia was chosen as the guest of honor for the 29th Tehran International Book Fair. How did that decision come about?

Officials of the two countries held several rounds of talks for nearly one year until they arrived at the decision to further boost cultural ties between Tehran and Moscow by giving the publishers more room to introduce their works, and allow the two nations a chance to get better acquainted with each other’s culture. As a result of the negotiations, Iran attended the 2015 Moscow’s International Book Fair as the special guest and now it was our turn to bring snippets of Russian culture to this ancient land.

So what did you think of Iran’s presence at 2015 Moscow Book Fair?

Iran had a very interesting participation at the fair. It had a very organized schedule with various interesting cultural programs. They had compiled a list of Iranian contemporary writers and their literary works for the specialists interested in this field. Furthermore, they had a list of foreign works translated by Iranians as well.

But Iran’s programs were not limited to merely books, rather there was a number of special programs designed for visitors interested in Iranian culture. Some symbols of Iran were put on display; but perhaps the most praised were lavished upon Iranian traditional music that was performed during the four-day event. Other interesting programs included a traditional performance of Persian marionette, or ‘Kheimeh-Shab-Bazi, and ‘Naqqali’, an epic narration inspired by Ferdowsi’s Shahnameh (Book of Kings).

And what about Moscow’s special programs at Tehran’s Book Fair for introducing Russian culture to Iranian visitors?

We came to the festival with a full schedule of programs running for ten days. We held several lectures on Russia’s contemporary literature, introducing a number of key authors and books, as well several ‘round tables’ for discussing the issue of mutual translations, and the two countries’ prospects of the book industry development. In order to have a permanent program for introducing Russia to Iranian people, a center has recently opened in Iran called ‘Visit Russia’ which gives useful information about the country’s culture and if visitors at the fair plan to visit Russia, they can coordinate their trip with this cultural center.

How many publishers did Russia bring to this year’s Tehran book fair, and on what areas are the presented books mainly focused?

Russia participated in the fair with 50 publishers, all selected from the biggest and the best, from publishing house ‘Eksmo’ which is the leader of Russian book market, offering the widest range of classical and modern fiction in the Russian language, to the smallest which is ‘Aleteia’, a publishing house in St. Petersburg. The highest number of books were offered by five publishing houses. The books were mainly in the fields of industry, aerospace and railway, and special lectures were given on those topics during the fair. Another major part was dedicated to Russian language textbooks for those university students who are studying Russian language in Iran. Another part was related to children literature and contemporary literature. Sadly, Russia’s contemporary literature have been widely neglected in Iran, so we made sure to include special programs for introducing it to Iranian reading public.

What do you think the current biggest challenge facing the publishing industry is in Russia?

The number of active publishing houses and bookstores in Russia has declined in recent years and on other hand, the people have become less invested in reading.

Why the decline in interest, though? What is to blame for that?

Well, that question is not very easy to answer. I think people nowadays have less time for reading. Either that, or even when they do get some free time, they have now more options on how to spend it, such as going to the theater, the cinema or surfing the internet. All these factors may lead to a decline in interest in reading books. Although I think the decreasing number of bookstores are more to blame. Last year, Russian government implemented a plan in support of promoting book reading and started constructing bookstores in parts of the country where it seemed to have insufficient number of bookstores so that people’s interest in books would be rekindled.

The 29th edition of Tehran International Book Fair with the slogan “Tomorrow is too late to read” ran from May 4 to 14, 2016 at the Shahr-e Aftab International Exhibition Complex. Publishers from over 60 countries including Russia, Germany, Italy, China, Sweden, Lebanon, Denmark, Kazakhstan, Pakistan and Syria displayed their works to the Iranian booklovers in various fields of humanities, arts, engineering, science, medicine and reference. Russia participated in this year’s TIBF with over 1200 titles of 50 publishers, and its delegation consisted of 35 figures of culture, among them such writers as: Alexey Varlamov, Viktor Yerofeev, Kanta Ibragimov, Farit Nagimov, Guzel Yakhina, Yelena Usachyova, Aliyona Karimova, Nazim Zeynalov, as well as Russian publishers, journalists and book distributors.

Sergey Kaykin is the Head of the General Directorate of International Book Exhibitions and Fairs in Russia.