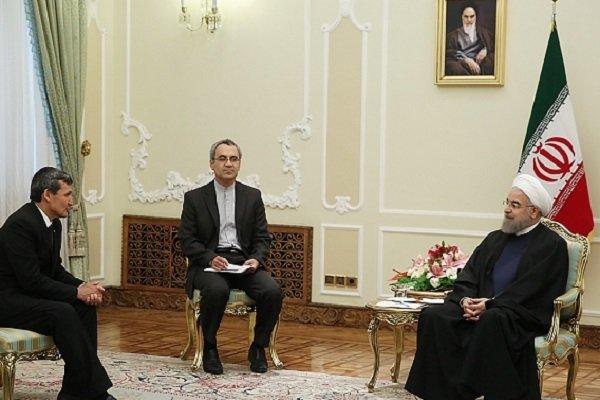 Iran’s Hassan Rouhani has told Turkmenistan foreign minister multilateral cooperation of other countries along with Iran and Turkmenistan would improve regional stability.

Rouhani said that Iran and its northeastern neighbor had worked successfully with each other in the past and both nations should improve ties and regional cooperation. He also urged ‘bringing an order to the Caspian Sea’ to accurately and fairly using the capacities of the sea with other littoral states; “the railroad will turn Turkmenistan and Iran in a strategic point with linking Central Asian more distant countries to southern Asia; we are now a gate-keeper between Persian Gulf and southern waters and Central Asia and even east Asia,” Rouhani emphasized. “Iran and Turkmenistan could successfully work together about preparing a draft of rights regime of the Caspian Sea which had been long overdue; fighting drug trafficking and terrorism provides another excellent ground for cooperation.”

“The Islamic Republic of Iran will stand with Turkmenistan government and people and we should exploit opportunities to improve ties between two nations of common history and ethnic similarities,” Rouhani promised. “A multilateral regional cooperation unit including Iran, Turkmenistan and other countries would help bring stability to the region and economic boom.”

Meredow for his part emphasized upon historical ties and close destiny of both nations and called for more improved relations with Iran. He voiced gratitude for Iran’s supporting positions for Turkmenistan in international community and emphasized upon the principle of good-neighborliness, mutual respect, and on acting to secure bilateral interests.

‘Zero Days’ details US-Israeli effort to use malware against Iran

Representatives from five Caspian Sea littoral states are to attend the 4th meeting of Collaboration on Maritime Safety ...