How to Judge the New Generation of Caviar Fishing 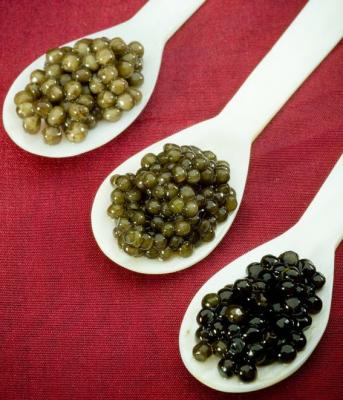 Have a hankering for caviar? A decade ago, buying the black pearls was straightforward. Whether Russian or Iranian, almost all sturgeon eggs came from the Caspian Sea, and even novices knew that beluga was the best, followed by osetra and sevruga. In January 2006, this knowledge became as useful as an eight-track tape. A toxic mix of pollution, poaching, and overfishing had put 85% of the global sturgeon population at risk, and the worldwide trade of wild caviar was finally banned.

Happily, the global appetite for the coveted delicacy did not disappear, and that demand has since created a large and lucrative market for sustainably farmed sturgeon. Today, anyone can legally purchase, via the Internet, caviar of exceptional quality from well-run caviar farms.

You just have to know how to shop.

As before, caviar should be evaluated by three criteria: taste, texture, and tone. The taste should be fresh, nutty, and creamy. There should be no fishy aroma or aftertaste. The texture of the eggs should be firm, smooth, and a little moist to the touch, never sticky or wet. Upon taking a spoonful, you should be able to use your tongue to separate the grains on the roof of your mouth. Tone simply means color. Some people prize golden caviar; others prefer silver hues or shiny black pearls.

You also need to know your producer. Like heirloom peaches and grass-fed beef, caviar has entered the age of the celebrity farmer. The key to buying high-quality cured sturgeon roe is to know its origins, which does not mean fine-food purveyors like Petrossian and Zabar’s, which repackage caviar under their own labels. It means knowing the farms from which they source their product. It is a geographically diverse group that includes—but is by no means limited to—Caviar Giaveri in Italy, Galilee Caviar in Israel, Mottra Caviar in Latvia, Kaluga Queen on China’s Russian border, Royal Belgian Caviar, and Fish Breeders of Idaho. Prices vary from $53 to $394 for a 30-gram tin.

Pristine water is why these particular farms are sought out. The best fish farms have a superb water source and use recirculating aquaculture to cleanse and re-oxygenate the water in their pools. Many of these pools are also temperature controlled to mimic the sturgeon’s natural spawning cycle.

Latvia’s Mottra Caviar, whose farm has earned a seal of approval from the official Slow Food organization, takes the purity of their environment to the extreme. “All the basins of the rivers around the world are dirty from the pesticides and antibiotics that are byproducts of human life,” says its manager, Dmitry Trachook.

To ensure a fresh product with no muddy aftertaste, he raises sturgeon in temperature-controlled pools with water pumped from artesian wells 500 feet below the earth. Hangers equipped with air-filtration systems protect the pools from pollutants and local birds.

Some fine-caviar purveyors, such as Browne Trading, have started cobranding with premium sturgeon farms in order to create more transparency in the market. “This way, the consumer knows everything about their caviar, from the sturgeon’s species, to its diet, to its country of origin and how it was raised,” says Rod Browne Mitchell, Browne’s president. Whether your local caviar purveyors cobrand or not, they should be able to tell you exactly where their caviar was sourced and how it was cultivated.

Species matter, as well. Beluga caviar has been banned in the U.S. since October 2008, though China’s Kaluga Queen exports a beluga hybrid that is a true indulgence. Sevruga is nearly impossible to raise in captivity and has mostly disappeared from the marketplace. Of the traditional caviars, only osetra remains available, and it has become the connoisseurs’ caviar of choice. Keep in mind that osetra comes exclusively from Russian sturgeon.

Be careful: “Siberian Osetra” is a misnomer used to confuse consumers. Osetra simply means sturgeon in Russian, and Siberian sturgeon is a separate species that is far easier to breed. The white-sturgeon transmontanus is, in contrast, increasingly considered a premium-quality caviar. Native to our West Coast, it has a fine grain and nutty flavor similar to osetra.

Finally, be sure to check the “sell by” date. Caviar is a cured product whose flavor evolves and matures in the months directly following the harvest, but it does not stay fresh forever. Most experts recommend consuming caviar within six months of packaging. If you open a jar of caviar and it smells fishy, return it to the store. Most retailers won’t balk at making you whole.

How to Judge New Generation Caviar
0
0

How to Judge New Generation Caviar

IIKSS - The share of transfers of the State Oil Fund of Azerbaijan (SOFAZ) to the country’s state ...

Russia and allies to sign trade pact with Iran

TEHRAN — The Kremlin said Friday that Russia and its ex-Soviet allies will sign a free-trade pact with Iran, ...

IIKSS- Relations between Russia and the United States are at their worst since the Cold War, a Russian ...