To Walk This Wilderness, Carry a Shovel Tourism 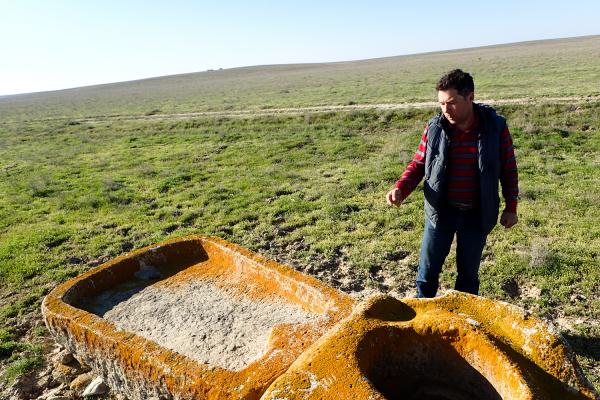 Caching water on the steppes of Kazakhstan is like an act of worship or a duty of penance.
Paul Salopek is walking the global trail of the first humans who migrated out of Africa in the Stone Age. His continuous 21,000-mile foot journey, called the “Out of Eden Walk,” is recorded in dispatches.

What is the most important tool required to walk 350 miles across the vast, barren, sky-crushed steppes of western Kazakhstan?

A shovel. A shovel allows you to dig. And to dig is to live.

You must sink the shovel’s blade into the salt-crusted soil. You must hack and chop through the wiry roots of the sparse and brittle grass to reach:

Water is the rarest of all elements in the Mangystau region, a little-visited wilderness of aching space that once was traversed by Silk Road caravans. In this sere hinterland of Central Asia—a moonscape of white chalk cliffs, of sand dunes and cracked brown earth, of burning sun, of boulders shaped into perfect spheres like gigantic billiard balls—water is the treasure. It is scarce, essential, precious. But it is not nature’s hidden supply that you must dig for. No! The natural water of these dry steppes lies hidden far too deep underground. (And besides, it is mostly alkaline.) You must dig instead to deposit your own water. To survive, you bury jugs of water—beforehand—along the path of your dusty walking trail.

I am walking across the planet.

I am now three years into a continuous, 21,000-mile foot journey through the world in the ghostly wake of the first Stone Age peoples who rambled out of Africa. Western Kazakhstan is only the second place along my extremely long and erratic route where I have been forced to cache my every sip of water. (The other landscape demanding such laborious effort was the Hejaz of Saudi Arabia.) For many days, as I prepare to trek eastward toward China, I have been engaged in this surreal activity.
Planting water in such lonesome places is like a conceptual music performance by the avant-garde artist John Cage. It is like kabuki theater. It is like an act of worship or a duty of penance.

I drive out into the desert, into a flat, oceanic stage of pure emptiness. I pock a sea of coarse grasses with shovel. Into a small hole I drop a few mouthfuls of vital liquid. I cover it up. I record the site with a GPS device. I do this again and again—inching across a howling desolation, a badlands that stretches the distance between Phoenix and Los Angeles. A mostly treeless, skeletal world. Without roads. Of eternal winds. Amid aural hallucinations. In stopped time.

We break camp in a ravine, my friend the archaeologist Andrey Astafyev and I. Astayfev climbs into his four-by-four and steers it across the trackless steppe. He ticks off distances on a GPS: 5 . . . 10 . . . 15 . . . 20 miles, the average walking day. Then he brakes the car in a titanic nothingness.

“About here,” he says in Russian.

We pile out. We grab the shovel from his trunk. We dig. Tenderly, we lay gallons down like dead babies into shallow graves.

We are joined by a translator, Astafyev’s daughter Albina, a Caspian princess. Another car follows behind and zooms ahead: the guides and hunters Karim Junelbekov and Yerkin Shiganbayev. (Two cars are a safety measure: one pulls out the other if it gets bogged.) Two other local friends join us: Nurlan Amangeldiyev, who once delivered tacos by bicycle in Houston, and Daulet Begendikov, a former Kazakh judge and my new walking partner. In the remotest heart of the desert we find an outhouse door standing—without purpose or meaning—like some portal to another dimension. Its flaking blue paint is peeled away by wind. We knock on it.
Millennia ago, none of this was necessary.

From the Paleolithic to the rise of the Soviet Union in the 1920s, the steppes of western Kazakhstan were crisscrossed in the old way, on foot, and later by horse and camel. Hunters, herders, shepherds, soldiers, Sufi mystics, and traders on the northern Silk Road navigated these stiff grasslands on trails that were punctuated regularly by medieval caravanserais, 18th-century mosques, Iron Age necropolises and Bronze Age fortresses. Hand-dug water wells—trimmed with stones, equipped with beautifully carved troughs—marked the terminus of every walked day. This antique web of infrastructure crumbled even before the disastrous collectivization imposed by Stalin. It sank beyond memory with the advent of cars and paved roads. We encounter these ghostly remnants as we roam the wastes of Mangystau. The old wells are filled with sand. Our small band of neo-nomads must remake them with bottled water and Astafyev’s shovel.

Astafyev: a compact and friendly scholar of wry, high spirits. He has rebuilt this lost Central Asian world for me by routing my walk past the ruins. Horizon-dazed at camps, we race each other across the steppe—sprinting across its saline flats. The hunter Yerkin Shiganbayev proclaims, over and over, “One small one, Paul!” as he pulls out a flagon of his homemade vodka. (Shiganbayev will hand-forge my cargo horses’ picket stake in his metal shop.) Karim Junelbekov, the other Kazakh hunter, advises me to watch for a certain black-breasted birds at dawn. The birds will help me: They always fly toward rare springs, hidden seeps.
We bury water. We move on.

Back in my tiny Brezhnev-era apartment in Aktau, the remote Caspian Sea port that will be my starting line for walking across Asia, I slump at my writing table. Tired. Sunburned. Wind-chapped. Dusty. Stunned.

I stare down at my open palms. I have a blister from digging.

It is mad—this water caching across the wilds of Mangystau. I am kept at it only by the uncommon grace of strangers-become-friends. I will set out soon. I will not be walking toward plastic bottles stashed in a colossal wilderness. I will be walking toward a better part of myself, toward these people.

To Walk This Wilderness Carry a Shovel
0
0

To Walk This Wilderness Carry a Shovel

Challenges and opportunities for managing the Caspian Hyrcanian Forests