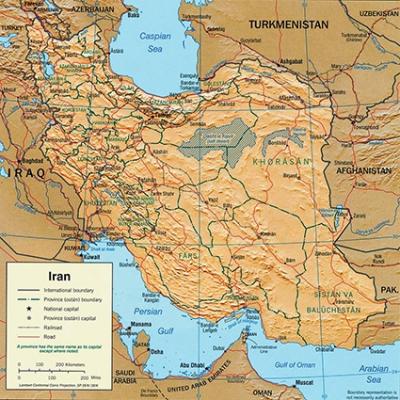 By the end of 2016, Iran intends to begin construction of a navigable water channel of approximately 600 km in length that will link the Caspian Sea to the Persian Gulf and Arabian Sea. As a result, it will become possible to travel between the Arctic seas and the Baltic region through a Russian water transport system to the Persian Gulf and the Indian Ocean. Russia and many Eastern European countries for the first time will be able to choose an alternative route to the traditional Bosporus - Dardanelles - Suez Canal - Red Sea.

Russia needs this project for peace, for income and even for war, if it happens. This project needs to be done urgently, before war blocks the Suez. And its instigators should also consider inviting investors from NATO countries to take a share in its development and protection, for if Russia specifies its own protective status over the trans-Iranian Channel, it will have the right to act as the United States can in Panama.

The history of the project ‘Caspian Sea - Persian Gulf’ dates back to 1889-1892 but it wasn’t until the beginning of the XXI century that an agreement was signed on the establishment of a transport corridor "North-South", which will link Russia to India through Iran. Yet this project has so far remained on paper despite the fact it is rightly considered to be a strategically important project, passing as it does through international waters. It could even mean the potential restriction of US military ships in the Persian Gulf- this Channel having strategic importance for Russian-Iranian relations in the current geopolitical reality.

The position of the Russian side is to ensure that the new Channel, the whole of which passes through the territory of Iran, is able to provide the shortest access to the Indian Ocean basin from the North Atlantic, the Baltic, Black and Azov seas, the Danube and the Volga-Caspian basin. The route is needed not only as a transportation corridor, but also to provide desalinated water to the central drylands of Iran.

According to experts, the fact that the Channel will connect the south-western regions of the Caspian Sea, Abadan and Horremshahr (on the border with Iraq) and the Persian Gulf seems most financially agreeable. However, the concept of a transfer of water from the Caspian Sea to the central areas of Iran to address the problems of water scarcity in agriculture may carry with it negative consequences - such as a violation of the ecological system or environment changes.

Another important point is the logistics. In order for this Channel to actually be navigable, it needs great depth, and width, for the free movement of ships. As such it will be no mean feat, what with the vast difference in heights between the Caspian Sea and the Persian Gulf regions.

For Iran, this project is vitally important. They call it the “Iranian River,” a transport corridor crossing the entire country, north to south. If the project is financed, Iran will gain an unprecedented national transport network which will upgrade and optimize, accelerate and simplify passenger and cargo shipping, among which will be the crucial transportation of energy resources - oil and gas. But the final word on this project is for specialists, politicians and diplomats, which, through an integrated approach, can give Iran a new life.

Without doubt a series of very deep and accurate studies need to be arranged, technical calculations made and the economic and environmental risks considered.

Dimitri Dolaberidze, Deputy Director of the Center of Research for the Study of Georgian Complex Development Issues of the Tbilisi State University, is an expert on political geography.