UAE is home to the world's largest caviar factory Fishing 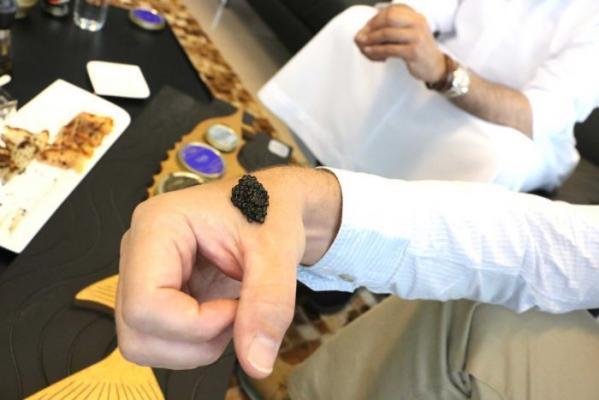 A sprawling industrial estate in the capital of the United Arab Emirates is the unlikely location for a fish farm which is the world's largest caviar factory.

Sturgeon, the fish that produces highly-prized caviar, is mostly found in the cold waters of the Caspian Sea, but also in parts of Europe and the United States.

But Emirates Aquatech co-founder and managing director Ahmed Al Dhaheri has created a caviar production facility in Abu Dhabi where temperatures outside, and across the Arabian Peninsula, can regularly top 50 degrees.

Having invested over $100 million, the company is inching closer to its goal of 35 tonnes of the delicacy a year, making it one of the world's biggest producers.

It was, Mr Al Dhaheri freely admits, a wacky scheme but one that is now paying dividends.

"Even we ourselves thought we were crazy going into this project, but we had the inner belief that we can do what others thought can't be done," he said.

"It's caviar from the desert. Who would imagine that one day it could be produced here in Abu Dhabi? We produced it and we're competing with the world."

The business plan was to tap into the growing global market for the treasured food which has seen declining sturgeon stocks in recent years due to over-fishing and pollution.

Sturgeon have been endangered for over a decade, sending caviar prices higher than ever.

It has led to the creation of a number of caviar farms around the world, but the owners of Emirates Aquatech have pursued caviar production on a scale larger than anywhere else.

In fact, the UAE facility is so big workers use tricycles to get around the factory floor.

Its warehouses are equipped with 80 tanks and basins, sophisticated filtration systems, automated feed conveyors and a computerised monitoring system, enabling the company to optimise conditions for a 12-month caviar production cycle, something that is impossible in the wild.

From the hatchery, the sturgeon are transferred into different tanks according to their size.

Over four years they are pampered and fattened, during which time the males and highly-prized females are separated.

For six weeks prior to slaughter, the caviar-bearing fish are kept in a cleansing tank to ensure optimum egg and flesh quality.

In the clinical confines of the production unit, they are killed and the roe extracted, cleaned and packed before being exported around the world.

"This batch is going to Japan," Mr Al Dhaheri said, pointing at a production worker dressed in a white lab coat, hat and mask who was packing tins.

"And the fish in the purging tank will be harvested for a delivery to Australia."

In the UAE, Emirates Aquatech's standard caviar, sold as the Yasa brand, retails for about $200 for a 100 gram tin. Its higher quality caviar fetches more.

The flesh from both the male and female fish is retained and sold to high-end hotels and restaurants. The skin, which can be tanned to make fine leather goods, is currently thrown away, but Mr Al Dhaheri says he plans to change that.

Though highly water intensive, about 90 per cent of it is reused by the plant, with only 10 per cent going to waste.

And in contrast to the regular use of antibiotics in other fish farms, Aquatech is adamant they are not used.

"We don't use this kind of thing. We use ozone, a natural gas, to reduce and control the total bacteria count in the tanks," production manager Mo'affaq said.

"That's why we haven't had any major infections."

Company aims to ensure the resurgence of sturgeon

The United Arab Emirates, with a population of about 9 million, is better known for the wealth generated by its huge oil and gas reserves.

But the Abu Dhabi Government has in recent years tried to diversify away from hydrocarbons.

Such diversification is a goal Mr Al Dhaheri is actively pursuing and, crucially, he wants to preserve wild sturgeon for the future and is confident his stock of 300,000 fish will play an important role.

"We're really proud to be helping to protect this type of fish from extinction. One of our main objectives is to one day take some of these fish back to their natural habitat," he said.

Azerbaijan reports on implementation of OPEC + deal for August

Azerbaijan presented data on its daily oil production in August 2018 to the OPEC Joint Technical Committee as part ...