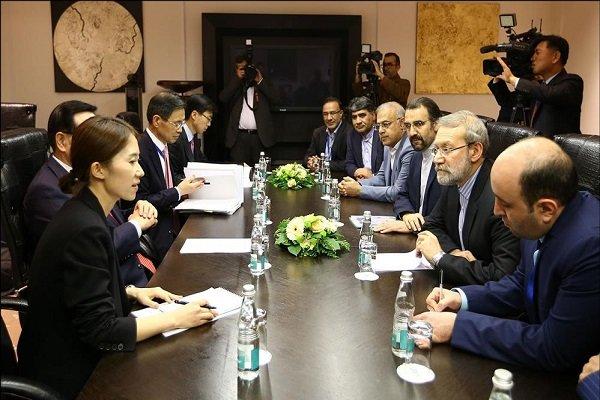 Iran’s Parliament Speaker Ali Larijani who was in Moscow to attend a summit of Eurasian parliament members held talks with counterparts of other Asian countries on ways to promote trade relations.

Ali Larijani, in a meeting with Pakistani Parliament Speaker in Moscow on Tuesday, said the gas pipeline project has been finalized in Iran, and expressed satisfaction over Pakistan’s participation in it. He also stressed that the two countries have ample opportunities for economic cooperation, particularly in the field of oil exports. Larijani further maintained that Iran-Pakistan consultations over the crisis in Yemen have been effective, expressing lament over the ‘wrong path’ that the Saudi regime has taken.

In meeting with Afghan counterpart, Larijani stressed the need for serious confrontation with terrorism.

In his meeting with his Tajik counterpart, Larijani reaffirmed that limitations facing Tehran-Dushanbe economic ties must be removed. Zuhurov, for his part, hailed the historical and cultural commonalities between the two countries, saying Iranian investors have implemented good economic projects in Tajikistan, although there is still need for further cooperation.

To Azerbaijani Parliament Speaker, Larijani called for peaceful resolution of Armenia-Azerbaijan clashes. Ogtay Asadov, for his part, stressed that his country is keen on expanding ties with Iran. On the Karabakh conflict, he criticized the measures taken by international mediators and Minsk group, saying “this conflict has been going on for 25 long years and so far, not even one single positive step has been taken to resolve the crisis.”

Ali Larijani attended the summit of Eurasian parliament members in the Russian capital city of Moscow on Tuesday, which was opened by statements by Russian President Vladimir Putin and UN Director General Ban Ki-moon.

IIKSS -  Russia is profoundly disappointed with the results of the 8th Review Conference of the Biological and ...