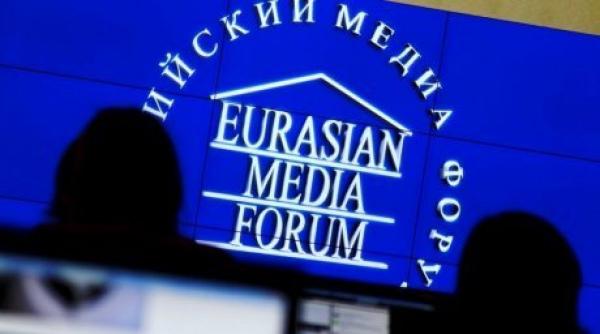 The Forum will discuss the most vexed problems of today. As always, the Eurasian Media Forum organizers are offering an opportunity for open dialogue among world-class experts. For the period of 13 years of its existence, the Forum has gone beyond being just a media event: it has become a unique world-class interactive platform, expanding its interests outside Eurasia.  Each year it has attracted more and more world-recognized and influential delegates. Looking back at the major topics discussed at the EAMF throughout the years, one can easily trace every geopolitical change that has happened during the last decade in the world. Deputy Prime Minister of the Republic of Kazakhstan Dariga Nazarbayeva is the head of the Organizing Committee of the EMF.

President of the Republic of Kazakhstan Nursultan Nazarbayev is expected to address the Eurasian Media Forum guests with a welcome speech at the opening ceremony on April 21.

Head of RK State has repeatedly underlined the important role of the Forum played in establishing mutual understanding between East and West. According to Nursultan Nazarbayev, "The Forum has gained wide international acclaim and has become a recognized platform for discussion of the most topical problems of our rapidly changing world, and for the development of new approaches to solving them."

The main issues of the agenda of XIII EAMF conference will be: “World economy in the context of fall in oil prices”, “Middle East, Syria and Islamic radicalism proliferation”, “Future of the European Union in conditions of unprecedented immigration”.

This year, within the program, the delegates will discuss the most relevant and significant issues of modern society: changes in world economy in the context of crisis and fall in oil prices; geopolitical interests of the world powerful countries and consequences of transformation processes in the Middle East; situation with refugees in the European Union; new image of oil countries and cost of the country brand. The Forum’s participants will also consider mass media role in establishing peace and fuelling conflicts.

As it has been announced before, on April 20-22, Astana will hold the regular XIII EAMF conference, which will be attended by the famous journalists, politicians, scientists, media experts and businessmen from different parts of the world.

All topics of the forth-coming panel discussions anyway concern the Global economic crisis and its global consequences.

The Forum program includes six major thematic blocks: "The present and future of the world economy. Who will get the leadership? Global crisis. World without oil - world without war "," The Arab world?. Transformation or the war of interests? What are the geopolitical implications of the transformation process in the region? "," A new image of the oil-producing countries. How to improve the brand effectiveness in the new reality? "," The struggle for the hearts and minds. Features of the information wars of the XXI century. Role of media in peace and fueling of conflicts "," The Future of the European Union. Where does Europe's competitiveness go? "," Business and politics in popular culture. "Star Factory".

Over 400 delegates from over 50 countries of the world will visit the Eurasian Media Forum this year. As in 2014, the Samruk-Kazina national wealth fund will be a general sponsor of the Forum.

A unique feature of XIII EAMF will be conduction of master classes with the participation of VIP speakers. At the request of the foreign and local media, as well as specialized agencies, Organizing Committee sought an opportunity to strengthen the content and increase the duration of the master classes.

"We always engage and strive to be useful to society. Our speakers not only take part in panel discussions but also give interviews to journalists, as well as carry out educational activities in the form of workshops, seminars and lectures. It is a great honor for us as for organizers and, of course, a very useful component which I think will be a good tradition of the Eurasian Media Forum ", - said R. Zhemkov.

Apart from this, the Organizing committee has made a decision to expand a cultural program for guests. The Eurasian Media Forum has for a long time been considered a visit card of the country. Now a unique opportunity to get the guests familiarized with the key facilities of the young capital of Kazakhstan emerged. Within the framework of the excursions the guests of the Forum will visit well known sights of Astana and areas which shall host the international EXPO exhibition in coming year. Special areas dedicated to the exhibition will be organized in Rixos hotel as well. The official website of the forum - http://eamedia.org/ru/

Iran's Foreign Minister is in Moscow for talks with his Russian counterpart on the ...

Moscow confirms meeting of Russian, Azerbaijani, Iranian leaders — FM   The Russian side confirms the plans to hold a meeting of ...