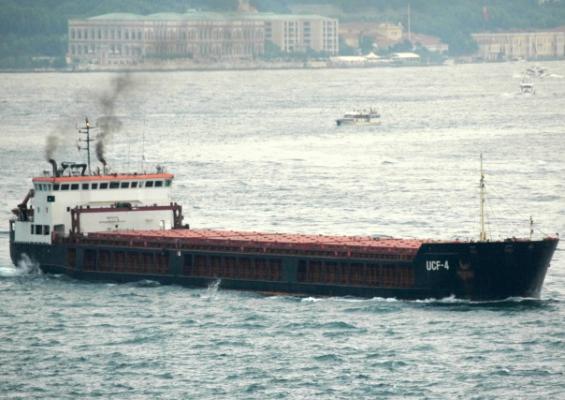 The general cargo ship Port Olya 3 grounded in Caspian sea on 15 nautical miles South-East off Lagan, Russia. The vessel was proceeding at Volga – Caspian sea Canal, when suffered steering gear failure and ran aground into a sandy/mud shallow off the coast. The cargo ship stuck hardly and was not able to refloat by own power. The general cargo vessel Port Olya 3 was loaded with 495 tons of mill cake and several containers en route from Iran to port Olya, Volga river. Before running aground, the vessel headed to approach to the river-sea channel, but steering gear blocked the ship grounded into the shallow.

The crew requested assistance from local authorities, but there are concerns for possible hull damage and was ordered underwater inspection before towing back to safe depth. During the grounded there is no water pollution and no injured seamen. The salvage operation is planned for tomorrow, when the vessel is expected to be refloated and anchored for full inspection. In case of failure during refloating, the vessel might be partially unloaded to reduce draft.

Speaking to IRNA on the sidelines of the 14th Annual Symposium on the Iranian Archaeology, underway at Iran National Museum ...

China, Kazakhstan eye implementation of joint projects   China and Kazakhstan, the two strategic partners, are planning to implement some 51 ...