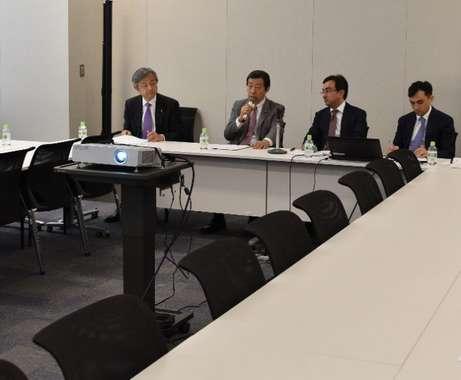 The Armenia-Azerbaijan Nagorno-Karabakh conflict, as well as further developments of cooperation between Azerbaijan and Japan was high on the agenda of the annual meeting of the Inter-parliamentary Friendship League.

Addressing the event, Gursel Ismayilzade, Azerbaijan’s Ambassador to Japan, stressed that the long-lasting conflict, which emerged as a result of Armenia’s aggressive policy on the background of the Soviet breakup in 1991, could be resolved only within the territorial integrity and sovereignty of Azerbaijan.

The ambassador further spoke about the recent developments in the contact line of the Armenian and Azerbaijani troops.

“The current status-quo is unacceptable, and existence of the Armenian Armed Forces in occupied territories of Azerbaijan is the main threat to ensuring the peace,” Ismayilzade said.

The Japanese parliamentarians, in turn, expressed concern over the escalation of the conflict and stressed the importance of peaceful settlement of the problem.

Armenian troops staged provocations in the contact line of Azerbaijani and Armenian troops, which later grow into large military operations on April 2. After four-day war the sides reached an agreement to follow the ceasefire through the mediation of Russia.

The sides discussed prospects of cooperation between Tokyo and Baku. As part of the meeting, Azerbaijan’s economic development and regional projects realized under the initiative of the country were highlighted.

Azerbaijan and Japan established diplomatic relations in 1992, a year later after Azerbaijan gained independence. Japan was one of the first countries to support Azerbaijan's forward-looking oil strategy.

Today two major Japanese companies Itochu and Impex are involved in the “Contract of the Century”, a large-scale international contract on joint development of three oil fields - Azeri, Chirag and Guneshli in the Azerbaijani sector of Caspian Sea.

Leaders of Japanese business, Mitsubishi, Mitsui, Marubeni, and Sojits are involved in energy and infrastructure projects in the country.

Turkish President Recep Tayyip Erdoğan says Ankara, along with Tehran and Moscow is determined to ...

Plans for a new Euro-Caspian pipeline will solidify the west's dependence on fossil fuels and authoritarian regimes. This new documentary ...