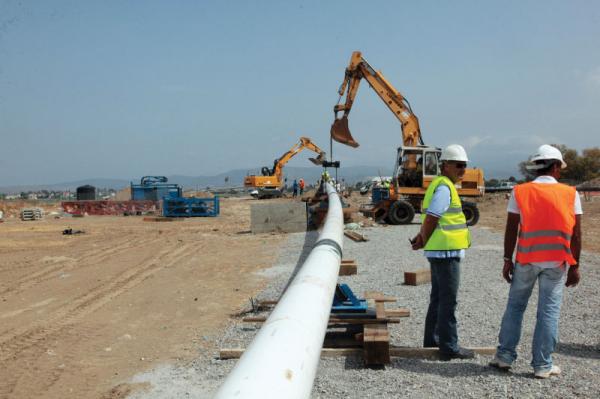 Greece—and DEPA—are at the heart of major initiatives to increase energy security in Greece and hence the European Union. At the same time, Greece is securing its role as a regional energy hub.

The energy map of Southern Europe is shifting dramatically, with new, major natural gas pipelines set to reinforce Greece’s role as an energy hub and a key player in the goal to diversify EU energy sources and add to EU energy security.

The New Era of Green Energy has begun and economical solutions are needed to meet European and International regulations concerning the low emissions global cap.

As a main aim of the mid-term strategy, the company is seeking to increase domestic gas use by expanding the urban gas network in order to accommodate a sizeable increase in household customers by 2018. The company is also focusing on expanding the use of gas for electricity consumption to coincide with Greece’s goal to reduce use of lignite (so-called ‘brown coal’).

The IGB project is being developed by ICGB AD, a 50-50 joint venture between IGI Poseidon SA and Bulgarian Energy Holding. DEPA and Italian Edison each hold a 50% of IGI Poseidon’s shares.

In December 2015 the IGB’s Final Investment Decision (FID) was taken by the ICGB Shareholders.

The pipeline is designed with a length of 182km, a diameter of 32 inches and initial capacity 3 billion cubic meters (bcm) of natural gas annually with potential upgrade to 5bcm per year.

The pipeline, is ideally located to transport gas from the Caspian Sea, the Middle East and the Eastern Mediterranean basin to Europe through Greece. Commercial Operation Date (COD) is expected by 2018.

The project has been included in the European Union’s Projects of Common Interest list (PCI list), in the Greek list of Fast Track projects, as well as in the list of priority infrastructure projects of Central and South Eastern Europe Gas Connectivity (CESEC) and enjoys the total support of the Greek and Bulgarian Governments.

Designed to further enhance European energy security, diversification of sources and routes, and local participation in all aspects of energy policy and natural gas delivery, the Eastern Mediterranean Pipeline, or the East Med, will connect the recently discovered gas fields in the Levantine Basin in the Southeast Mediterranean with mainland Greece.

This key project is projected to be 1900 kilometers (600 of which would transit Greece’s mainland) and have a capacity of up to 14 bcm annually.

The East Med is designed to have exit points in Cyprus, Crete, mainland Greece, as well as in its end point at the connection point with the Poseidon pipeline. Notably, the project has been included in the EU’s Projects of Common Interest list (PCI list) as well as in Greece’s Fast Track legislation procedure for  national strategic investments.

The Pre-FEED (Front End Engineering Design) activities that are currently being performed enjoy the support of the governments of Greece, Cyprus and Italy while the cost of these studies is co-financed by 50% by the Connecting Europe Facility (CEF) 2015 funds.

A project to connect Greece with Italy, the Interconnector Greece-Italy (IGI) consists of two sections: a 590-kilometer onshore pipeline across Northern Greece (from Komotini to the Thesprotia region), developed by DESFA, and a 207-kilometer offshore pipeline (Poseidon pipeline) connecting Greece with Italy (from the Thesprotia region in Greece to Otranto in Southern Italy), developed by the Greek company IGI Poseidon S.A. IGI Poseidon S.A., is equally owned by DEPA and the Italian Edison.

The Poseidon pipeline’s diameter is 32 inches and it is designed to transport initial annual capacity of 14 bcm with an upgrade potential to 20 bcm per year. It is ideally located to transport gas from the Caspian Sea, the Middle East and the Eastern Mediterranean basin to Europe through Greece.

The Poseidon project has obtained all mandatory authorizations for construction and operation.

Having booked a significant amount of capacity in the Trans-Adriatic Pipeline (TAP), DEPA has shown its level of commitment

Although a variety of technologies could be used to comply with emission limits, LNG technology is the only option that is capable of meeting current and prospective requirements for the main emission categories (Sox, NOx, PM, CO2).

LNG has the potential to be competitive, in terms of price, compared to distillate fuels.

Moreover, unlike other options, additional process technology does not need to be installed in many cases. Also, LNG is available throughout the world in sufficient quantities that cover anticipated shipping-sector demand levels for the coming decades.

Poseidon Med II is a pivotal European project through which legislative and market requirements are being prepared for the use of LNG as a marine fuel in the Eastern Mediterranean.

This project supports the development of a value-chain and supply network that will help generate demand and contribute to international regulations for a more sustainable maritime sector. Targeted infrastructure planning is being implemented for the effort.

The Poseidon Med II initiative is co-financed by the European Commission, while DEPA, as the coordinator of a consortium comprised of 26 members, is striving towards establishing the necessary infrastructure, as well as regulatory and legal framework, in order to both meet and generate prospective marine LNG demand.

The project’s duration is 5-7 years, involves Greece, Italy, and Cyprus, and the ports of Piraeus, Heraklion, Patras, Igoumenitsa, Limassol and Venice.

Iran to attend high commission on tech. coop. with Russia

Iran to attend high commission on tech. coop. with Russia Sattari, Iran’s VP for science and technology, heading a ...