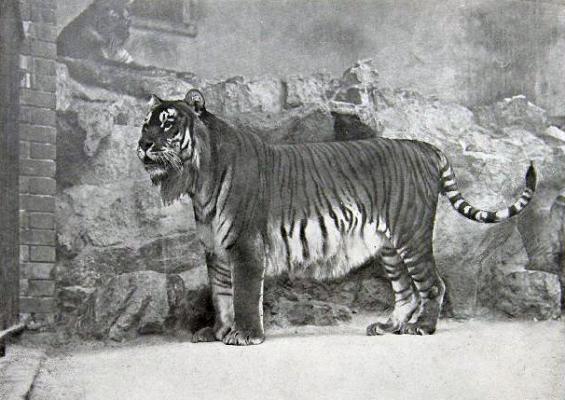 The Caspian tiger (Panthera tigris virgata), also known as the Hyrcanian tiger, the Mazandaran tiger, the Persian tiger and the Turan tiger, is an extinct tiger subspecies that had been recorded in the wild until the early 1970s, and formerly inhabited the sparse forest habitats and riverine corridors west and south of the Caspian Sea, from Turkey, Iran and east through Central Asia into the Takla Makan desert of Xinjiang, China. There are no individuals in captivity.

The Caspian tiger was formerly found in Chinese and Russian Turkestan, Afghanistan, Iran, and Turkey.

The Caspian tiger together with the Siberian and Bengal tiger subspecies represented the largest living cat and ranked among the biggest cats that ever existed.

The main background colour of its pelage varied, though generally it was brighter and more uniform than that of Far Eastern tigers. The stripes were narrower, fuller and more closely set than those of the Siberian tiger. The colour of its stripes were a mixture of brown or cinnamon shades. Pure black patterns were invariably found only on the head, neck, the middle of the back and at the tip of the tail. Angular patterns at the base of the tail were less developed than those of the Far Eastern populations. The contrast between the summer and winter coats was sharp, though not to the same extent as in Far Eastern populations. The winter coat was paler, with less distinct patterns. The summer coat had a similar density and hair length to that of the Bengal tiger, though its stripes were usually narrower, longer and closer set.
Phylogenetic relationship to Siberian tiger

At the start of the 21st century, researchers from the University of Oxford, the U.S. National Cancer Institute and the Hebrew University of Jerusalem collected tissue samples from 23 Caspian tiger specimens kept in museums across Eurasia. They sequenced at least one segment of five mitochondrial genes, and observed a low amount of variability of the mitochondrial DNA in P. t. virgata as compared to other tiger subspecies. They re-assessed the phylogenetic relationships of tiger subspecies and observed a remarkable similarity between Caspian and Amur tiger indicating that the Amur tiger population is the genetically closest living relative of the extinct Caspian tiger, and strongly implying a very recent common ancestry for the two groups. Based on phylogeographic analysis they suggested that the ancestor of Caspian and Amur tigers colonized Central Asia via the Gansu−Silk Road region from eastern China less than 10,000 years ago, and subsequently traversed Siberia eastward to establish the Amur tiger in the Russian Far East. The actions of industrial age humans may have been the critical factor in the reciprocal isolation of Caspian and Amur tigers from what was likely a single contiguous population. While conducting a geographical variation study in tigers, it was discovered that the Caspian tiger is indistinguishable from other tiger subspecies. Its skull size and shape are similar to those of the Siberian tiger.

Of all tiger subspecies, Amur tigers are most suited for potential reintroduction to the former range of the Caspian tiger.
Distribution and habitat

Historical records show that the distribution of Caspian tigers in the region of the Caspian Sea was not continuous but patchy, and associated with watercourses, river basins, and lake edges. In the 19th century, they occurred:

in the extreme southeast of the Caucasus : in hilly and lowland forests of the Talysh Mountains, in the Lenkoran Lowlands, in the lowland forests of Prishib, from where they moved into the eastern plains of the Trans-Caucasus; and in the Zangezur Mountains of northwestern Iran;
in Middle Asia : in southwestern Turkmenia along the Atrek River and its tributaries, Sumbar and Chandyr Rivers; in the western and southwestern parts of Kopet-Dag; in the environs of Ashkabad in the northern foothills; in Afghanistan along the upper reaches of Hari-Rud at Herat, and along the jungles in the lower reaches of the river; around Tedzhen and Murgap and along the Kushka and Kashan rivers; in the Amu-Darya basin as far the Aral Sea; along the Syr-Darya to the Fergana Valley as far as Tashkent and the western spur of Talas Alatau; along the entire coast of the Aral Sea; along the Chu and Ili Rivers; all along the southern shore of Lake Balkhash, and northwards into the southern Altai Mountains.

Their former distribution can be approximated by examining the distribution of ungulates in the region. Wild pigs were the numerically dominant ungulates occurring in forested habitats, along watercourses, in reed beds and in thickets of the Caspian and Aral seas. Where watercourses penetrated deep into desert areas, suitable wild pig and tiger habitat was often linear, only a few kilometers wide at most. Red and roe deer occurred in forests around the Black Sea to the western side and around the southern end of the Caspian in a narrow belt of forest cover. Roe deer occurred in forested areas south of Lake Balkash. Bactrian deer occurred in the narrow belt of forest habitat on the southern border of the Aral Sea, and southward along the Syr-Darya and Amu-Darya rivers.

No data are available for home ranges of Caspian tigers. In search of prey, Caspian tigers were compelled to prowl widely and follow ungulates from one pasture to another. Wild pigs and cervids formed their main prey base. In many regions of Middle Asia, Bactrian deer and roe deer were important prey species apart from wild pigs. Occasionally, they also preyed on Caucasian red deer, goitered gazelle in Iran, Eurasian golden jackals, jungle cats, locusts, and other small mammals in the lower Amu-Darya River area, and on saiga, wild horses, Persian onagers in Miankaleh peninsula, Turkmenian kulans, Mongolian wild asses, and mountain sheep in the Zhana-Darya and around the Aral Sea, and on Manchurian wapiti and moose in the Baikal area. They followed herds of migratory prey species such as reindeer, and caught fish in flooded areas and irrigation channels. In winter, they frequently attacked dogs and livestock straying away from herds. They preferred drinking water from rivers, and drank from lakes in seasons when water was less brackish.

In 1938, the first protected area Tigrovaya Balka, "tiger former river channel", was established in Tajikistan. The name was given to this zapovednik after a tiger had attacked two Russian Army officers riding horseback along a dried-up river channel called balka. Tigrovaya Balka was the last stronghold of Caspian tigers in the Soviet Union, and is situated in the lower reaches of Vakhsh River between the Piandj and Kofarnihon River near the border of Afghanistan. The last Caspian tiger was seen there in 1958.

Since 1947, tigers were legally protected in the USSR.

In Iran, Caspian tigers have been protected since 1957, with heavy fines for shooting. In the early 1970s, biologists from the Iran Department of the Environment searched several years for Caspian tigers in the uninhabited areas of Caspian forests, but did not find any evidence of their presence.

Stimulated by recent findings that the Amur tiger is the closest relative of the Caspian tiger, albeit slightly smaller, discussions started as to whether the Amur tiger could be an appropriate subspecies for reintroduction into a safe place in Central Asia. The Amu-Darya Delta was suggested as a potential site for such a project. A feasibility study was initiated to investigate if the area is suitable and if such an initiative would receive support from relevant decision makers. A viable tiger population of about 100 animals would require at least 5,000 km2 (1,900 sq mi) of large tracts of contiguous habitat with rich prey populations. Such habitat is not available at this stage and cannot be provided in the short term. The proposed region is therefore unsuitable for the reintroduction, at least at this stage.

While the restoration of the Caspian tiger has stimulated discussions, the locations for the tigers have yet to become fully involved in the planning. But through preliminary ecological surveys it has been revealed that some small populated areas of Central Asia have preserved natural habitat suitable for tigers.

As a result of a recent meeting, a Turkmen-Romanian working group cooperating in the field of transport, have decided ...