Why do we need to save the tiger? Ecosystem 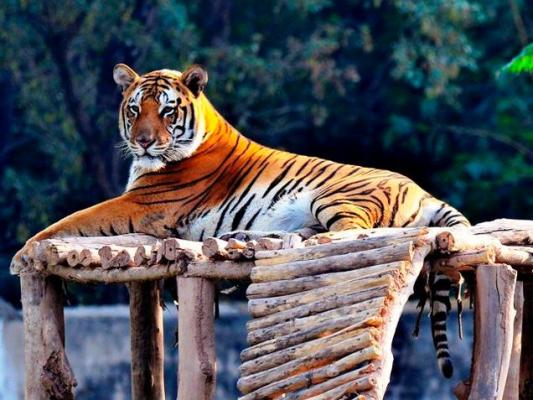 The natural population of these beautiful felines that we are used to seeing under captivity is disintegrating slowly.

Tigers are among the most endangered animals on earth. The natural population of these beautiful felines that we are used to seeing under captivity is disintegrating slowly. That has huge implications for this ecosystem that we inhabit, as tigers have a crucial role to play in the ecosystem.

According to Project Tiger, tigers are believed to have evolved over 1 million years ago in Asia. From there, the tiger spread north to the Amur region of eastern Russia, south to the islands of Indonesia, and southwest to Indochina and the Indian subcontinent, eastern Turkey, and the Caspian Sea.

This species, which a century ago was believed to number 1,00,000 the world over, is today reduced to about 3890, according to the World Wildlife Fund and the Global Tiger Forum. However, even these figures are disputed. The IUCN currently recognises nine subspecies, three of which are extinct in the wild. Of the six subspecies still found in the wild, three are considered to be Critically Endangered -- the South China Tiger, the Sumatran Tiger and the Malayan Tiger. The first of these has not been observed in the wild since the 1970s and may be extinct. Three further subspecies have been declared extinct; Bali, Caspian and Javan Tigers.

High-density tiger populations which are likely to produce ‘surplus’ animals that can disperse and expand the populations now occupy less than 10 per cent of the remaining 1.2 million square km of natural tiger habitat, according to the Wildlife Conservation Society. Almost 70 per cent of all wild tigers survive within these population ‘source sites’. Here the recruitment of tiger cubs exceeds mortality of tigers within the population, explains conservation biologist Sanjay Gubbi. They are recovering slowly, only in some reserves where protection has improved, WCS says. Outside these source sites lie vast ‘sink landscapes’, which are continuing to lose tigers and habitat due to hunting and man-animal conflict due to developmental pressures.

Forest land is now only 26 per cent of the total land area in Asia and the Pacific put together, which accounts for about one-fifth of the world's forests or 734 million hectares, according to a 2005 Food and Agriculture Organization (FAO) report. What that implies is that the tiger, whose population is largely found in this region, is restricted to 26 per cent of the land area.

According to the Global Tiger Initiative, tigers are indicators of the ecological wellness of planet earth. Being the dominant predators of the ecosystem, they ensure that the numbers of herbivores like deer are kept balanced. A steep fall in tiger population could lead to a rise in herbivore population, which could potentially destroy forests by consuming the trees and plants. And forests have a huge role to play in preserving this earth that we live in.

At a time when the phenomena of climate change have increased concerns about environmental hazards, conservation of tigers offer immense ecological services in terms of carbon storage value. Forests have to be saved to ensure that carbon storage is achieved. In fact, under the Reduced Emissions from Deforestation and Degradation (REED) approach, climate change is sought to be addressed by using forests as carbon sinks. Poaching or killing of large bodied vertebrates such as tigers results in increase of herbivore population, which in turn results in forests getting decimated.

In a study conducted in Ranthambore tiger reserve and published in 2012, geographer Kuldeep Pareta found that the estimated carbon stock in Ranthambhore Tiger Reserve fell progressively between 1975 to 2012: 34.15, 32.35, 30.66, 28.78, and 27.52 M. Kg. / Ha for the years 1975, 1990, 2000, 2006, and 2012 respectively. Agricultural expansion and resultant deforestation were to blame for this, which has serious consequences for tiger population as well. Tigers feed on mammalian herbivores such as chinkara, chital and sambar in this reserve area, thus keeping their population in check and helping to preserve the forests. Tiger habitats also provide critical ecosystem services such as flood control and hydrological services/securing watersheds.

What are the current efforts being made to save the tiger?

India is home to 70 per cent of global tiger population. Therefore, the country has an important role to play in tiger conservation. The Government of India started ‘Project Tiger’ in 1972 with a view to conserving the animal. As part of this project nine core buffer areas for maintaining tiger population were notified. Now, this has expanded to 48 tiger reserves.

In-principle approval has now been given for more tiger reserves to be set up to help expand and preserve their territory. The in-principle approval has been accorded by the National Tiger Conservation Authority for the creation of four new tiger reserves at Ratapani Tiger Reserve (Madhya Pradesh), Sunabeda Tiger Reserve (Odisha), and Guru Ghasidas (Chhattisgarh). The Centre has given approval to Kudremukh National Park (Karnataka) for the State to declare it as a tiger reserve, which is yet to be done. The State Governments have been advised to send proposals for declaring the following areas as tiger reserves: Suhelwa (Uttar Pradesh), Mhadei Sanctuary (Goa), Srivilliputhur Grizzled Squirrel Wildlife Sanctuary / Megamalai Wildlife Sanctuary / Varushanadu Valley (Tamil Nadu), Dibang Wildlife Sanctuary (Arunachal Pradesh) and Cauvery-MM Hills (Karnataka).

Besides protecting tiger territory, other measures being taken to save the tiger include: curbing wildlife trade through international agreements. CITES is an international agreement between governments aimed at ensuring that international trade in specimens of wild animals and plants, including tigers, does not threaten their survival. India ratified this treaty in 1976.

As we have seen, apart from the ecological services provided by the animal, the tiger also offers direct use such as attracting tourists, which provide incomes for local communities. The aesthetic, ethical and cultural value of tigers have also proved to be critical factors for saving tigers, which has also ensured the success of tiger conservation in India.

However, despite measures being initiated to protect wild tigers, habitat loss and poaching continue to pose a threat to the animal’s survival. Tiger parts are used in traditional Chinese medicines, tiger skin is used for decorative and medicinal purposes and tiger bones are again used for medicinal purposes for curing body pain, et al. Between 2000 and 2014, TRAFFIC's research found that parts of a minimum of 1,590 Tigers were seized in Tiger range States, an average of two Tigers per week.