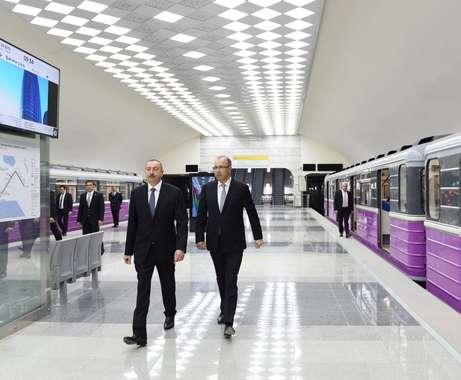 Baku citizens and the guests of the Pearl of the Caspian Sea will have an access to two more subway stations in the capital, which is expected to ease the daily travelling plans.

Those, who wish to travel to the regions of Azerbaijan from Baku International Bus Terminal or from the Terminal to the center of the capital, will be able to make a cheap travel by using the newly-commissioned Avtovagzal and Memar Ajami stations, which were commissioned on April 19.

President Ilham Aliyev attended the opening of Avtovagzal and Memar Ajami stations on the new violet line of Baku Metro.

Chairman of Baku Metro CJSC Zaur Huseynov informed the head of state about the conceptual development scheme of the Baku Metro lines.

The conceptual development scheme envisages expanding the existing infrastructure in phases by 2030, and creating a huge underground transport network.

Under the scheme, Baku Metro will consist of five lines, 76 stations and 119 km-long network of underground tunnels. Some 53 new metro stations will be built until 2030.

The head of state cut the ribbon symbolizing the opening of Avtovagzal station, and reviewed the conditions created here.

The station, the construction of which started in September, 2009, consists of the platform, two vestibules, eight exits, ventilation point and two pyramids.

The total length of the station is 560 meters. An elevator was installed here for persons with disabilities.

President Aliyev then arrived at Memar Ajami station by train.

The total length of the station is 168.5 meters. There are three exits and an elevator for persons with disabilities.

Functioning for about 46 years the Baku Metro is one of the fastest and cheapest ways to travel in Baku. The fare for a subway is 20 kopecks ($0.13).

It is currently over 35 kilometers long with 25 stations and the Green, Red and Purple lines.

Avtovagzal station is the first of the 12 subway stations of the Purple line, which starts from the International Bus Terminal Complex and ends at the Garachukhur district.

Opened in 1967, the Baku Metro is implementing a 20-year program for the development of the subway system.

Some subways are also planned to open in the most populated and developed cities of the country, including Sumgayit, Nakhchivan and Ganja.

On the same day, President Aliyev also attended the opening of a new administrative building of Azeravtoyol OJSC.

The large-scale repair-construction and landscaping work was carried out in the area, which occupies a total area of 1.7 hectares. Under the Decree of President Ilham Aliyev dated March 9, 2016, Azeryolservis OJSC was renamed to Azeravtoyol OJSC.

A bust of national leader Heydar Aliyev was installed in the building. There are photo stands reflecting the national leader's life and political activities, as well as President Ilham Aliyev's attention to the development of road and transport infrastructure in Azerbaijan.

The building has a canteen, 252-seat auditorium and elevators. The building was equipped with the most modern ventilation and fire protection systems.

High quality building materials were used in the construction of the building. The modern video observation and computer systems were installed here. The network of a new digital communication system was also established. The design of the roof of the building was completely renovated. The green areas were laid out in the area.

Numerous contracts signed during the visit of Azerbaijani President Ilham Aliyev to France are another victory of the foreign ...