Blurring the Lines of Kazakhstan-Russia Relations Political and military events 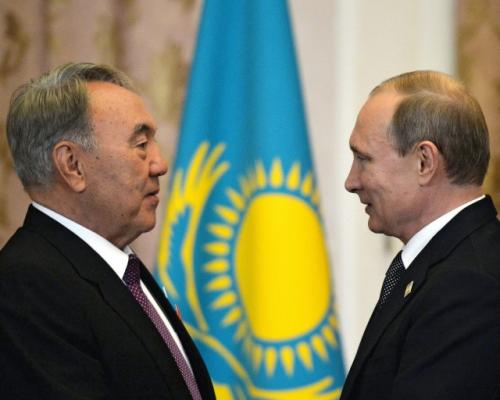 Kazakhstan will try to increase its independence from Russia-led alliances.
To that end, Astana will make economic and military deals with other countries and build up its domestic military capacity.
Moscow may try to use the ethnic Russian population in northern Kazakhstan to protect its ties to the country, forcing Astana to vacillate between policies that prevent unrest and limit Russia's influence.

Kazakhstan is one of Russia's closest allies. Before the fall of the Soviet Union, Kazakh President Nursultan Nazarbayev was a proponent of creating a new union with Russia. Even now, the president continues to acknowledge the deep cultural, security and economic ties between the two countries. And unlike other former Soviet states, Kazakhstan is firmly in Russia's camp, joining the Collective Security Treaty Organization (CSTO) military bloc, the Eurasian Economic Union (EEU) and the Commonwealth of Independent States free trade bloc.But Kazakhstan also knows the vulnerabilities of being too close to Russia. Economically, its interconnected trade with and through Russia has suffered because of tensions with the West, forcing Kazakhstan to look elsewhere for relief. Militarily, excessive dependence on first Soviet and now Russian equipment has convinced Kazakhstan to invest in its own arms development. So while Kazakhstan will continue to stay connected with Russia, it will take steps to establish alternative foreign ties and guard the country through domestic policies — all while being careful not to alienate Moscow.
Economic Relationships

Even before the end of the Soviet Union, Kazakhstan attempted to tighten its hold on its commodities while keeping its foreign economic relationships diverse. Kazakhstan made the early decision to control most of its energy resources, the sales of which would become the revenue funding the country. And for large projects requiring foreign technology and investment, Kazakhstan looked to the West. Even before Moscow relinquished its mineral rights in Kazakhstan, Nazarbayev was in talks with the United States' Chevron in 1990 to develop the Kazakh energy sector. Russia now only plays a minor role in the largest projects, which have foreign operators from many different countries.

But with a recession looming later this year, Kazakhstan is again looking beyond its economic bloc for assistance. Nazarbayev is wrapping up visits to the European Union, Turkey and Iran focused on increasing trade and investment. While in Brussels, Nazarbayev and European Commission President Jean-Claude Juncker discussed the upcoming implementation of the European Union's Enhanced Partnership and Cooperation Agreement with Kazakhstan. The deal is intended to simplify the legal process of increasing investment and economic ties. It is also not as controversial as signing an EU Partnership Agreement, which Ukraine and Georgia did in 2014, conflicting with Russia's goals for dominance in its former Soviet periphery.

Astana is eager to attract European interest in its upcoming privatization plans, as well as greater investment and trade. Kazakhstan's trade with the European Union has fallen in value by nearly half over the past year because of low oil prices. Still, the bloc is Kazakhstan's largest trading partner, doing double the trade that Kazakhstan does with the EEU. And Astana's relationship with the EEU has recently cooled over the group's exclusivity. In February, Nazarbayev appealed to the bloc for permission to improve relations with the European Union — despite its sanctions against the EEU's leader, Russia. The Kazakh president has even criticized the EEU's benefits, discussing temporarily closing borders with Russia in November 2015 to prevent cheap Russian goods from flooding the Kazakh market — a move that would have breached the EEU agreement.

Nazarbayev also pursued economic and investment deals in mining, agriculture and transportation worth $2 billion with Iran on April 12. As the third-largest grain producer among the former Soviet states, Kazakhstan's grain trade is important, but the country's location has forced it to rely on Russia for export, something Astana has long wanted to change.

But the break in relations also led Russia to halt the transit of goods from Turkey to Kazakhstan through Russian territory. Thus Kazakhstan has been turning to alternative trade routes to maintain trade with Turkey, just as Kazakhstan has with Ukraine — despite Russia’s objections. Kazakhstan has increased shipments across Georgia, Azerbaijan and the Caspian Sea, as well as Iran, Turkmenistan and Uzbekistan. These routes have increased the cost of Kazakhstan's imports from Ukraine and Turkey, though trade has only slightly dipped over the past year.

Nazarbayev's son-in-law, Timur Kulibayev, who has long been considered a Moscow loyalist, is facilitating the trade shift. As head of the country's Chamber of Commerce, Kulibayev understands the pressures on Kazakh trade and is currently negotiating with the countries supporting it to simplify procedures for documentation, verification and transport. Clearly when pressure is high enough, even those most loyal to Moscow will act to protect their country.
Military Policies

Kazakhstan further blurred the lines of military alliances when CSTO member Armenia engaged in renewed conflict with Azerbaijan at the start of April. According to a Stratfor source, Kazakhstan did not support the CSTO coming to Armenia's aid, mainly because of its cultural and, more important, economic links to Azerbaijan.

A more telling sign of Kazakhstan's changing foreign policies is its attempt to create its own military industrial complex and seek new military procurements. Kazakhstan housed a large swath of the Soviet military industrial complex, mostly naval production in the Caspian Sea. After the collapse of the Soviet Union, many manufacturing factories were converted to civilian products or were shut down, forcing the Kazakh military to either inherit Soviet weaponry or buy new Russian equipment.

By the mid-2000s, the Kazakh government had slowly begun to invest more into domestic weapons manufacturing. After the 2008 Russian invasion of neighboring Georgia, Kazakhstan's focus on domestic production and non-Russian procurement rapidly increased. And since Russia’s foray into eastern Ukraine in 2014, Kazakhstan has been even more active in ensuring it reaches its goal of increased military self-sufficiency. It has also done more to diversify from whom it makes military purchases, even though under the auspices of the CSTO, Kazakhstan has the option to receive arms and equipment from Russia at a discounted rate.

For example, with the help of two Canadian companies, Kazakhstan began construction in February on two new plants to produce bullet cartridges that will be completed by the end of 2017. Kazakhstan has traditionally bought its bullet cartridges from Russia, but now the country plans to produce and even export its own. This year, Kazakhstan will also begin producing upgraded trailer cars for its land forces, mines for its navy and mobile communication components for its border guards. Besides Canada, Kazakhstan has been looking for investment and technology transfers from Turkey, the United Kingdom, France and Israel. As of 2015, Kazakhstan produces nearly half of its annual military procurements and aims to raise domestic production above 80 percent by 2020. Of those procurements, Russia makes up 30 percent.

But Russia has other means of keeping Kazakhstan loyal, mainly by forcing it to focus on maintaining the stability of its population. Following Russia's annexation of Crimea in 2014, Nazarbayev has been increasingly concerned about the large ethnic Russian population concentrated in Kazakhstan's northern regions — and Moscow's ability to manipulate it. At the fall of the Soviet Union, ethnic Russians made up more than 40 percent of the country's population, while Kazakhs made up 36 percent. Today, thanks to low birthrates and emigration, Kazakhstan's Russian population falls closer to 23 percent — still enough to pose a serious challenge to national unity.

After the Soviet Union fell, Kazakhstan flirted with the idea of creating a union between the ethnically Turkic states in Central Asia. The discussion prompted Moscow to propose the creation of a Slavic Union, which would not only unite Russia, Ukraine and Belarus but would also include Kazakhstan’s Russian population, effectively cutting Kazakhstan in half. Kazakhstan subsequently dropped all formal attempts to unify Central Asia. So great was the Kazakh government's fear of separatism that when Russian ultra-nationalist politician Vladimir Zhirinovsky in 2014 claimed Russia would consider annexing northern Kazakhstan, the Kazakh government called an emergency security session and Nazarbayev threatened to leave the EEU.

But in December 2015, Kazakhstan amended the laws on foreign channels and advertising in the country. According to a Stratfor source, Kazakhstan had started limiting Russian advertising and broadcasts in the country. Russian officials went to Astana to complain, comparing the move to those of Kiev before its conflict with separatists began in eastern Ukraine. Consequently, Nazarbayev changed the policies in February, to the point of ordering regional administrations and police to check that the Russian language was being freely used in the country and to crack down on those preventing it. The shift came out of fear that the previous policies were alienating the northern populations. Now the strategy is to keep the ethnic Russian population calm while trying to decrease Moscow’s influence in the country.

The fascinating land of Dagestan   The Republic of Dagestan set on the Caspian Sea between the staggering ...

The chairman of the board of the Kazakh national company, Kazakh Invest, Saparbek Tuyakbaev, held a meeting with Russian ...