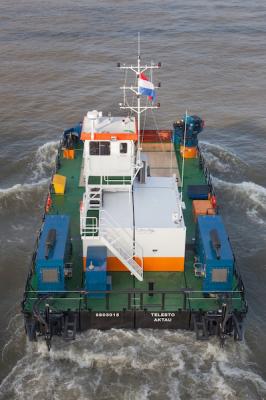 To support its ongoing dredging activities, Van Oord has commenced an 18-month charter agreement with Damen Marine Services for a Modular Multi Cat (MMuC) 2210. Damen completed construction under a short timescale, delivering the vessel just four months after contract signing. The newly built vessel is the first fully classified Damen MMuC to enter service, making Damen Marine Services the launching customer. Dredging and marine contractor Van Oord has a substantial fleet operating in the Caspian Sea region, to which Damen has contributed six vessels. In addition to four crew boats, these include two Cutter Suction Dredgers (CSD 650), the Ural River and the Mangystau, that were delivered last year. This new MMuC 2210, called Telesto, will be mobilised in a dredge support role to the Mangystau.

Damen performed the bulk of the construction of the 22-metre MMuC at its Koźle yard in Poland. This was followed by final outfitting and delivery at Damen Shipyards Gorinchem in the Netherlands just four months after contract signing.

A fast delivery was imperative says Damen Marine Services Managing Director Rik van Prooijen: “The northern part of the Caspian Sea freezes over in the winter months. So it was vital to get this vessel delivered by March – the start of the operational season there.”

“We have to give credit to Van Oord as launching customer. Without them, we would not have started this project. Our role in this contract was an enabler. This is particularly important with a new design and short delivery time – this requires quick decision making and creative solutions.”

The vessel’s modular design – a characteristic that it shares with the CSD 650 Mangystau – means that transportation to its destination is a relatively straightforward affair. “The Telesto and all its components are completely containerised,” informs Damen Design and Proposal Engineer Freek Haagmans. ”We can load the whole lot onto trucks and drive it to Kazakhstan in about 12 days. The sea route, on the other hand, would take about 6 weeks for such a vessel.”

“For operations in this part of the Caspian Sea, it is crucial to have a vessel with a shallow draught,” Mr Haagmans continues. “With a draught of less than one metre, the MMuC 2210 certainly meets that condition.”

Another pertinent specification of the vessel is a modular accommodation unit with cooking and sleeping facilities for two persons. Also relevant to the Telesto’s duties are a 60 tonne-metre crane and a 30-tonne winch: providing valuable dredge support and anchor handling capacity.

Iran ready to swap oil with Russia   Oil Minister Bijan Zanganeh has reported on negotiations between Iran and ...

Ashgabat hosted July 2 the political consultations between the Ministries of Foreign Affairs of Turkmenistan and Romania with participation ...