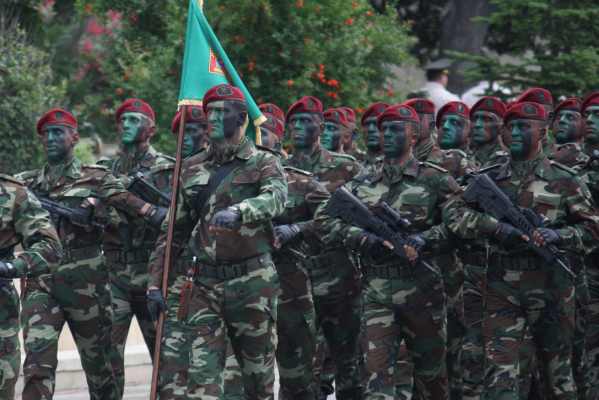 Azerbaijan has set a goal to take decisive measures towards army building in 2016.

Today, the Azerbaijani army is among the strongest armies in the world both for its material and technical equipment, and in terms of combat capability.

President Ilham Aliyev made the remark as part of the meeting of the Cabinet of Ministers on the results of socio-economic development in the first quarter of 2016 and the future tasks.

"First and foremost, we must pay more attention to the army building," he noted. We live in a state of war. Our lands are under occupation. Of course, in this case, more attention should be paid, is paid and will be paid to building of the army."

The head of state believes that in order to achieve the successful building of the army, Azerbaijan's economy should grow even faster.

Lately, the U.S. Global Firepower, a think tank providing a unique analytical display of data concerning world military power, has issued ‘World Military Strength Rankings’, which involves world’s 126 countries, including Azerbaijan. Thus, the country ranked 60th and left behind Armenia who ranked 94th, according to the report. While making this research, the experts took into account such indicators as amount of funds allocated to the military sphere, quantity of military personnel, financial resources, and many others.

While increasing military expenses, Azerbaijan also purchased new weapons and ammunition from countries of close cooperation in the military-technical field.

The main military suppliers of the country are Turkey, Israel, Russia and the U.S.

Moreover, the country established its national military industry to avoid dependence on equipment from foreign countries. Hundreds of military equipment items are manufactured by the enterprises of the Defense Industry Ministry, which was established in 2005.

Furthermore, more than 50 new production facilities have been built in Azerbaijan from 2007 to 2014.

Baku has also succeeded to modernize and strengthen its Caspian fleet inherited from Soviet times over the past few years. Currently, the Azerbaijani Navy is considered the second, after Russia, strongest fleet in the Caspian Sea for its capabilities.

Azerbaijan has strengthened its positions with forming the strongest armed forces in the South Caucasus region. The strengthening of the country’s military goes in line with the country's legal right of liberating its occupied lands by means of war should it be necessary.

Nowadays, the most important task in front of the Azerbaijani Army is to liberate occupied lands and restore the country’s territorial integrity and sovereignty.

Thanks to support of the government, Azerbaijani Armed Forces have managed to oppose recent Armenian provocations on the contact line of troops and liberated some strategic territories.

As the country is suffering from the occupation of its internationally recognized lands, Azerbaijan's strong military prowess should not be considered as an aggressive force but rather the expression of Baku's desire to protect its people and land. At the same time, this breakthrough resulted change in the psychology of Azerbaijan’s military forces and proved country’s unity in the fight against the enemy.

Russia and allies to sign trade pact with Iran

TEHRAN — The Kremlin said Friday that Russia and its ex-Soviet allies will sign a free-trade pact with Iran, ...

Ramsar Ramsar is a city in and the capital of Ramsar County, Mazandaran Province, Iran. At the ...