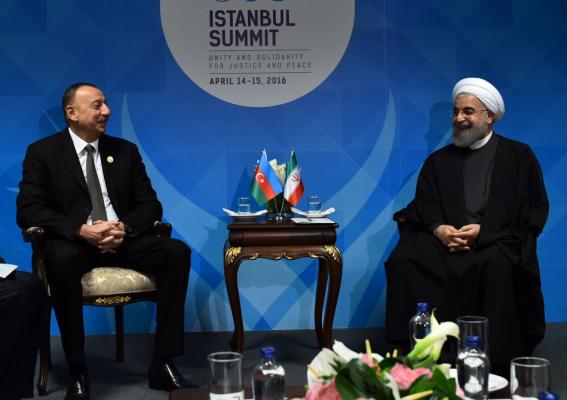 The presidents hailed dynamic development of Azerbaijani-Iranian bilateral and multilateral relations and cooperation in various fields. They pointed to wide opportunities for developing cooperation, and stressed the importance of intensifying reciprocal visits and such meetings in this regard.

During the conversation, they had a broad exchange of views over the events that happened on the line of contact of the Armenian and Azerbaijani troops in April. President Ilham Aliyev said Azerbaijan does not want war. "But we had to retaliate the provocative actions of the Armenian military units." The head of state expressed his gratitude to the President of Iran for phoning him and expressing his concerns about the events. They discussed the activity of the Minsk Group.

The issues of cooperation in oil and gas field were also discussed. The importance of continuing the negotiations to determine the legal status of the Caspian Sea was underlined. It was noted that this would contribute to elevating the relations between the two countries in political, security and other fields to a higher level.

The presidents of Azerbaijan and Iran discussed the development of the relations and cooperation in a variety of areas, including visa regime, tourism, financial and e-banking sectors, fight against extremism, terrorism and radicalism.

World Bank published a paper on Urban development under the title; Urbanization in Kazakhstan: desirable cities, ...