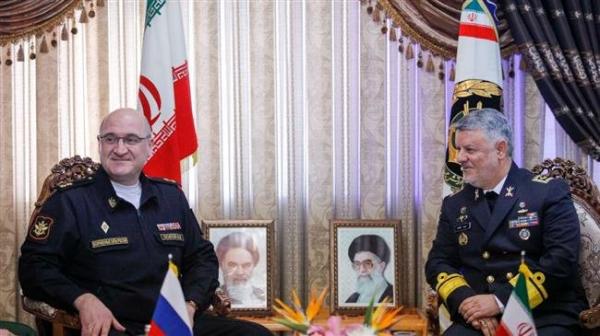 Navy Chief Rear Admiral Hossein Khanzadi said on Tuesday that the cooperation between the naval forces of Iran and Russia will be expanded in the future.

He made the remarks on the sidelines of a meeting with deputy chief of the Russian Army General Staff, Vice-Admiral Igor Osipov, which was held at the Navy’s headquarters in Tehran, Mehr reported.

Khanzadi stated that the two sides conferred on issues of mutual interest and expansion of ties.

The talks focused mostly on cooperation at sea in operational, technical and educational levels, exchange of squadrons, navy drills and practices and counteraction against piracy, he remarked.

During the meeting, Brigadier General Taqizadeh described the strategic cooperation between Iran and Russia against terrorism as a successful model of management and settlement of regional and international crises.

Pointing to the 2015 military agreement, Taqizadeh voiced Tehran’s readiness to expand military and defense cooperation with Moscow in all arenas.

He also pointed to Washington’s decision to pull its troops out of Syria, saying the decision was yet another defeat for U.S. President Donald Trump’s ill-advised policies towards the region.

For his part, the Russian general described stronger, constructive relations between the armed forces of Iran and Russia as a factor which boosts regional and international security.

Osipov said Iran and Russia can contribute to regional and international security and stability apart from their close military interaction in Syria.

Iran and Russia remained close allies of Syria and supported its legitimate government in the face of foreign-backed militancy that engulfed the country in 2011.

The Russian general also met on Wednesday with Real Admiral Ali Fadavi, the IRGC deputy chief for coordination. The two sides underlined the importance of boosting cooperation, especially in the fight against terrorism.

They also described achievements of Tehran-Moscow cooperation in the fight against terrorism and regional threats as one of the many areas of mutual cooperation.

Fadavi and Osipov emphasized that the defeat of the Takfiri terrorists in Syria has been the product of the strategic cooperation between the two countries' Armed Forces in assisting the resistance front, responding to the Syrian government's request for help and joint management of the battleground.

The Supervisory Board of the Moscow Exchange has decided to buy a 20-percent stake in the Kazakhstan Exchange (KASE) ...