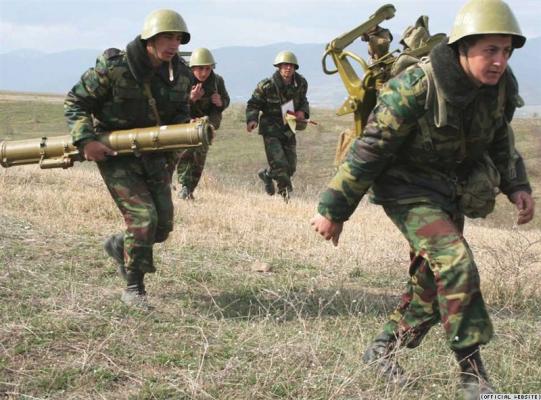 * Moscow and Washington competing for influence

BAKU/MOSCOW, April 7 Russia staked out its claim on Thursday to be the lead player in brokering a settlement to the conflict between Azerbaijan and Armenia, a role it hopes will enhance its clout in a region where it competes for influence with Washington.

Dozens of people were killed this week in four days of shelling and rocket strikes between Azerbaijan's military and Armenian-backed separatists over the breakaway Nagorno-Karabakh region, prompting fears of an all-out war.

A ceasefire was agreed on Tuesday at a behind-the-scenes meeting in Moscow between representatives of the warring sides.

"Beyond all doubt, we are interested - maybe more than the other foreign partners of these two countries - in this conflict being settled as soon as possible," Lavrov said after meeting his Azeri counterpart.

Lavrov noted that Russian President Vladimir Putin spoke to the Armenian and Azeri leaders to urge an end to the violence, and that Russian Prime Minister Dmitry Medvedev was travelling to Armenia on Thursday, then onto Azerbaijan the next day.

"We tried to assist our close friends in achieving the agreement, which we hope will be respected and implemented," Lavrov said, referring to the ceasefire deal.

Nagorno-Karabakh is a mountainous enclave within Azerbaijan's borders, populated mainly by ethnic Armenians who reject Azerbaijan's rule. With support from Armenia they fought a war in the early 1990s to establish de facto control over the territory.

The fighting this week was the most intense since a 1994 ceasefire that stopped the conflict but did not resolve the underlying dispute.

On Thursday, each side alleged the other had violated the Moscow-brokered truce in skirmishes overnight. Each said one of their servicemen was killed.

Those incidents aside, the ceasefire was broadly holding. A Reuters reporter in Nagorno-Karabakh's Martuni district, near the front line with Azerbaijan's forces, said there was no sign of fighting on Thursday.

Since the collapse of the Soviet Union, the United States and Europe have been cultivating ties in the South Caucasus region, which includes Azerbaijan, Armenia and their common neighbour Georgia.

Western powers see the region as a strategically-important corridor through which Caspian Sea oil and gas can be exported to world markets. The route bypasses Russia, so reducing Moscow's stranglehold on energy exports from the former Soviet Union.

Russia, the former imperial master, has seen its influence decline. In the Minsk Group, the body set up in 1994 to mediate in the Nagorno-Karabakh conflict, Russia had equal status alongside the United States and France.

According to Matthew Bryza, a former U.S. ambassador to Azerbaijan and co-chair of the Minsk Group, Putin saw this week's outbreak of violence in Nagorno-Karabakh as an opportunity to re-assert Moscow's sway.

Putin has already established a pattern of trying to restore Russia's clout beyond its borders, notably in Ukraine with his support for pro-Russian separatists and in Syria with a military campaign to help President Bashar al-Assad.

Since the latest flare-up over Nagorno-Karabakh, Russia has acted separately from the rest of the Minsk Group, Bryza told Reuters.

"Russia's goal in its lone mediation mission appears to be twofold: firstly, to repair its international reputation in relation to its debacle in Ukraine, and secondly to strengthen the impression in Armenia and Azerbaijan that Russia calls the shots in the South Caucasus," he said.

"The fact that the U.S. administration is so absent and timid in its response has the impact of ceding the strategic field in the South Caucasus to Russia. This can have profound and dangerous consequences in Syria, Ukraine, and far beyond."