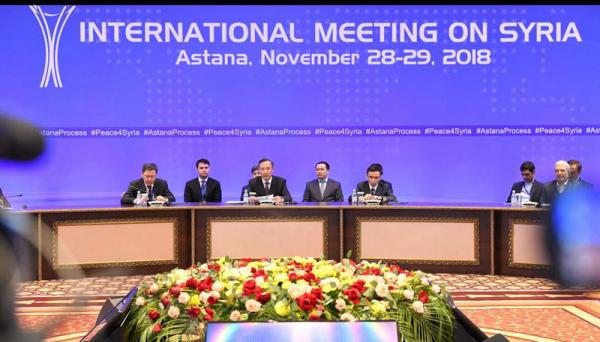 Astana hosted the 11th round of talks between Iran, Russia and Turkey on Syria on November 28-29.

Following the negotiations, the countries-guarantors of the Astana format made a joint statement in which reviewed in detail the situation in the Idlib de-escalation zone and confirmed readiness to fully implement the Memorandum on Stabilization in Idlib dated September 17, 2018.

Moreover, parties noted the need to continue all efforts to assist all Syrians in restoring normal, peaceful life and alleviating their suffering and emphasized the importance of creating conditions for the safe and voluntary return of refugees and internally displaced persons (IDPs) to their places of residence in Syria.

At the end of the meeting, it was decided to hold the next International Meeting on Syria in Astana in early February 2019.

To date, Kazakhstan’s capital Astana hosted nine rounds of negotiations on resolving the conflict in Syria. The main result of the meetings in the capital of Kazakhstan was the creation of de-escalation zones, which significantly reduced the level of violence in the country. The last meeting in the Astana format at a high level was held in Sochi on July 30-31, 2018.

Syria has been locked in civil war since March 2011. All previous efforts to achieve a diplomatic solution were ruined, with the opposition demanding Assad leave power, the government insisting he stay on, and neither side able to force the issue by achieving a military victory.

According to the UN, the number of victims of military operations in the country can range from 300,000 to half a million people. The settlement of the conflict is discussed in Astana and Geneva, and the Congress of the Syrian National Dialogue, which took place on January 30 this year in Sochi, was the first attempt to gather a wide range of participants on one negotiating platform.

Many believe the Astana meetings to offer new opportunities, that should be used at any cost.