The points of international law, Caspian Sea - the coastal length of the Caspian littoral countries and its relation with the process of delimitation of the continental shelf Legal Issues 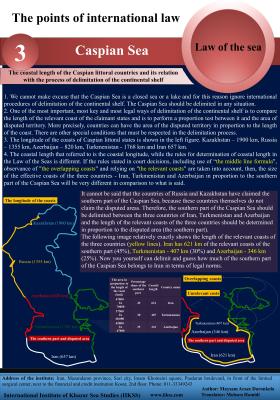 International Institute of Khazar Studies (IIKSS) – We cannot make excuse that the Caspian Sea is a closed sea or a lake and for this reason ignore international procedures of delimitation of the continental shelf. The Caspian Sea should be delimited in any situation. One of the most important, most key and most legal ways of delimitation of the continental shelf is to compare the length of the relevant coast of the claimant states and is to perform a proportion test between it and the area of disputed territory. More precisely, countries can have the area of the disputed territory in proportion to the length of the coast. There are other special conditions that must be respected in the delimitation process.

The coastal length that referred to is the coastal longitude, while the rules for determination of coastal length in the Law of the Seas is different. If the rules stated in court decisions, including use of “the middle line formula", observance of "the overlapping coasts" and relying on "the relevant coasts" are taken into account, then, the size of the effective coasts of the three countries - Iran, Turkmenistan and Azerbaijan in proportion to the southern part of the Caspian Sea will be very different in comparison to what is said.

The following image relatively exactly shows the length of the relevant coasts of the three countries (yellow lines). Iran has 621 km of the relevant coasts of the southern part (45%), Turkmenistan - 407 km (30%) and Azerbaijan - 346 km (25%). Now you yourself can delimit and guess how much of the southern part of the Caspian Sea belongs to Iran in terms of legal norms.

Author: Maysam Araee Daronkola - member of the faculty of the University Payame Noor and the director of the International Institute of Khazar Sea Studies (IIKSS), PhD of public international law

Translator: Mohsen Hamidi - expert on Central Asia and Caucasus, translator of Russian language and member of the Scientific Council of the International Institute of Khazar Sea Studies (IIKSS)

Azerbaijan’s Prime Minister Novruz Mammadov has hailed high-level bilateral relations between Azerbaijan and Hungary as he met with ...

Azerbaijan is a very reliable partner, President of the Alliance of Conservatives and Reformists in Europe (ACRE), Vice-Chairman of ...