President: relations between Turkey and Azerbaijan at highest level Political and military events 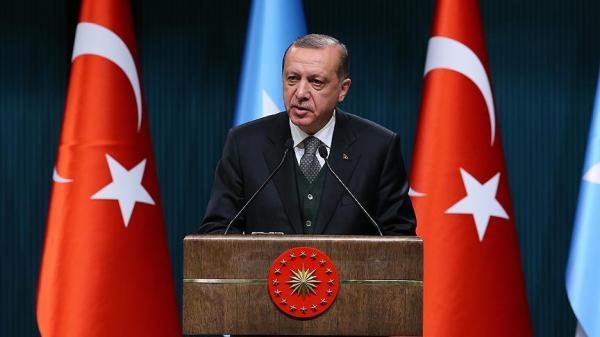 The relations between Turkey and Azerbaijan are at the highest level, the Turkish President Recep Tayyip Erdogan said, the Turkish media reported October 1.

Erdogan noted that the relations between Baku and Ankara are developing in all spheres.

He noted that Turkey also pays special attention to the development and strengthening of relations with Turkic-speaking countries.

Over the past year, political and economic relations between Azerbaijan and Turkey have reached a new level. Ankara supports Azerbaijan in all international organizations in connection with the settlement of the Armenia-Azerbaijan Nagorno-Karabakh conflict.

President Erdogan once again confirmed this position during the Summit of the Cooperation Council of Turkic-Speaking States, held in Kyrgyzstan on September 3.

He also said that Turkey, as before, will support Azerbaijan in all spheres.

The Turkish president also said that all Turkic-speaking states must contribute to settlement of conflicts and establishment of stability in the world.

Today, Azerbaijan and Turkey have a solid bilateral cooperation, but the two countries also have experience of working in a multilateral format.

Turkey participates in the majority of large-scale projects being implemented by Azerbaijan in the region. Among them are the Baku-Tbilisi-Ceyhan and Baku-Tbilisi-Erzurum pipeline projects.

Turkey and Azerbaijan demonstrated their leadership by signing an agreement on the Trans-Anatolian Natural Gas Pipeline (TANAP) in Istanbul in 2012. TANAP is one of the important components of the Southern Gas Corridor, which will allow supplying Azerbaijani gas to the world markets.

In summer, the first commercial gas from Azerbaijan’s Shah Deniz field was supplied via the first segment of the Southern Gas Corridor from the Sangachal terminal through the expanded South Caucasus Pipeline. The next stage was the commissioning of TANAP, through which gas is supplied to Turkey and further to Europe.

Another large-scale project of the century is the Baku-Tbilisi-Kars railway, which will ensure more active economic and trade cooperation between Ankara and Baku by supplying goods from Central Asia to Europe.

After the railway was commissioned in November 2017, the time of cargo transportation was almost halved, decreasing by 12-15 days. As is known, at this stage the biggest cargo turnover is carried out between Europe and China. Before the BTK railway, the transportation was carried out through sea routes and on average it took 25-30 days.

In addition, last year, Turkey exempted the supply of 42 types of products from the Nakhchivan Autonomous Republic from customs duties, and signed a memorandum on preferential trade with Azerbaijan, which provides for the introduction of a zero customs rate for import and export operations.

According to the Azerbaijani State Customs Committee, trade turnover between Azerbaijan and Turkey reached $2.64 billion in 2017, of which $1.37 billion accounted for exports to Turkey.

The trade turnover between the two countries increased by 14.8 percent in 2017. In January-July 2018, the Azerbaijani-Turkish trade turnover amounted to $ 1.74 billion (an increase of 19.6 percent over the year).