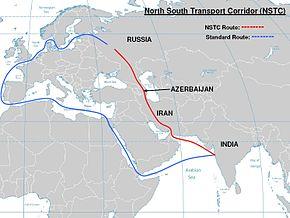 Following talks with the foreign ministers of Azerbaijan and Iran, Russian Foreign Minister Sergei Lavrov has revealed that Russia has agreed to begin substantive studies on the implementation of the North-South Transport Corridor, part of which will pass along the western coast of the Caspian Sea, from Russia to Iran through Azerbaijan.

“This involves working with the participation of the [different participants’] ministries of transport, which have to look at the technical and financial parameters of such a project. This also involves interaction between the customs and consular services, and we have agreed on this today,” said Lavrov on April 7.

“We believe that these projects will speed up cargo transit. We are discussing the final details,” said Iranian Foreign Minister Mohammad Javad Zarif.

Getting goods to their destination in half the time

The transport corridor from Russia to Iran through Azerbaijan is an important part of a larger north-south project that was stalled in the mid-2000s due to the imposition of Western sanctions against Iran. With the lifting of the restrictions on Iran, this project has again become relevant.

The North-South Transport Corridor is a route from St. Petersburg to the port of Mumbai in India, with a total length of just under 4,500 miles (7,200 kilometers). The goal of this corridor is to transport goods from India, Iran and other Persian Gulf countries to Russia via the Caspian Sea and on towards Northern and Western Europe.

Currently the flow of goods from India towards the European part of the Russian Federation is provided by maritime transport. From St. Petersburg, cargo has to sail around the entire western part of Europe and through the Suez Canal, resulting in an estimated travel time from Jawaharlal Nehru Port (Mumbai) to Moscow of about 40 days.

The new route – from St. Petersburg to Moscow, then to Astrakhan (Russia), Baku (Azerbaijan) and Bandar Abbas (a port city on the Persian Gulf in southern Iran) to Mumbai – is multimodal.

According to Russian Railways Logistics, the project involves the use of marine, rail and road transport, and will cut transport times by 50 percent. In the long term, this time can be reduced to just 14 days. The new route will eliminate the need to transport goods through the Suez Canal, which is not only overloaded, but also very expensive.

In February of this year, Russian Railways, Azerbaijan Railways, and ADY Express, within the framework of the North-South project, agreed to attract cargo flows to the Azerbaijani and Russian railway networks through the organization of transport along the India-Iran-Azerbaijan- Russia route, and vice versa.

An agreement on the construction of the transport corridor, which should be completed in 2017, was signed by Russia, India and Iran in 2000, and was ratified in 2002.

“In addition to the sea route from St. Petersburg, cargo travels to Iran also through ports in Turkmenistan and Kazakhstan – these routes being convenient for consignors and consignees located in the Urals and Siberia. In addition, there is an option of transportation via the road network of Azerbaijan,” said Ivan Andryevsky, chairman of the board of directors of the 2K Engineering Company.

“However, direct rail transportation means the reduction of travel times, and thus provides good prospects for the development of trade relations, not only between Russia and Iran, but also between the countries of Eastern Europe and Iran,” he added.

“We are now shipping cargo to Iran either across the Caspian Sea or across the ocean to the south of Iran – via St. Petersburg or via Novorossiysk, whichever is more convenient for the shippers,” said Alexei Bezborodov, head of the Infranews agency, explaining the relevance of the new route.

“However, for Iran, it is actually more profitable to receive loads in the north – either from the Caspian Sea, or by rail, because the majority of the people in Iran live in the northern part of the country. In the south there is the Port of Bandar Abbas, and the oil fields, but few people live down there,” he said.

To realize this route along the west coast of the Caspian Sea, a new railway line will have to be built linking the Azerbaijani city of Astara to the Iranian cities of Astara, Rasht, and Qazvin.

“The Qazvin-Astara railway line is an infrastructure project experiencing the typical delays. The main road route passes through the territory of Iran. The section was planned for completion in 2015, but then was postponed to 2016,” said Ivan Andryevsky.

However, the construction work continues and on April 20, a railway bridge between Azerbaijan and Iran will be opened, the Azerbaijani Foreign Minister Elmar Mammadyarov announced on April 7. He also confirmed that the Azerbaijani and Iranian rail networks should be linked before the end of 2016.

“This is a complex infrastructure project, with many tunnels, bridges and difficult mountainous areas. Therefore, problems with the implementation of this project were to be expected. However, the contractors are saying that this route is now at a high level of completion, so we can expect the railway to be completed, and in the near future at that,” said Andryevsky.

According to various sources, the estimated capacity of the railway, during the first phase, should be around 4-10 million tons of cargo, and this will increase in the future to 15-20 million tons per year.

Affordable and in everybody’s interests

As for the pricing policy, the question here is not in the fees charged, according to Alexei Bezborodov.

“There are no political problems here either. The sanctions against Iran were removed. For our Southern and Volga regions, Azerbaijan is quite an appropriate avenue for trade with Iran,” he said.

From an economic point of view, the project can be implemented quickly and without significant costs, because the infrastructure has already been built.

“The railway line on the territory of Iran itself is not yet complete, but that is no hindrance to us, we can use trucks for transportation there. In Azerbaijan, everything has already been built. All investments have been made during the last 15 years,” said Bezborodov.

In fact, all that remains is simply to launch the new route, to agree on the logistics, fees, customs and other procedures, on which the three countries now intend to work on in detail.

The new corridor is important for Iranian and Russian plans to increase the volume of bilateral trade. Iran is primarily interested in buying Russian grain – almost the entire volume of Russian grain exports now heads to Iran.

However, in terms of diversifying the range of products, train also allows the transport of food products, including vegetables and fruits, as well as industrial goods, oil and oil products. For example, Russia could start exporting vehicles to Iran, where around 130-150,000 Chinese cars are now being sold annually.

Given the large number of joint projects, in particular in the nuclear sphere, cargoes going from Russia and back could easily see the new route reach full capacity.

Turkey’s state oil company will press ahead with plans for an initial public offering as soon as next year, but ...