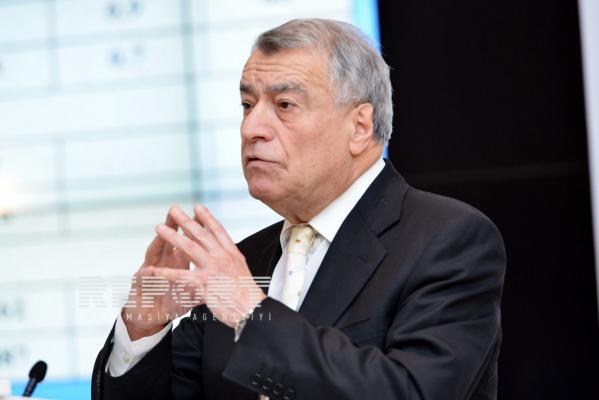 The energy policy of Azerbaijan, which has turned into one of the main guarantors of Europe’s energy security, recorded important achievements and milestones of historical significance in the first quarter of 2016.

Energy Minister Natig Aliyev announced about this at the Cabinet meeting chaired by President Aliyev.

The minister said that work done to implement the Southern Gas Corridor project is of significant importance as this project, which joins gas infrastructure of the Caspian region to the European markets, will change the energy map of the region and further enhance the role of Azerbaijan in the diversification of energy corridors, ensuring energy security of Europe.

Remembering the second meeting of the Advisory Council of the Southern Gas Corridor held in Baku on February 29, Aliyev said that it was one of the significant events held in Azerbaijan's energy sector in the first quarter of 2016.

He believes that such meetings are important in terms of political discussion of the project, joint review of the problems arising during its implementation, as well as search for appropriate solutions.

"Participation of delegations of the leading states and international financial institutions at the second meeting of the Advisory Council is an indication of global value given to the Southern Gas Corridor, on the one hand, and the international interest in it, on the other hand," Aliyev noted.

The minister further pointed to participation of the vice-presidents of the European Commission - Federica Mogherini and Maros Sefcovic, as well as the Special Envoy and Coordinator for International Energy Affairs of the U.S. State Department, Amos Hochstein at this meeting, saying that it not only demonstrates the international and transnational essence of Southern Gas Corridor, but is regarded as a great attention of the international power centers to the relations with Azerbaijan.

This meeting also showed that Azerbaijan plays a crucial role in the implementation of the Southern Gas Corridor project, and enjoys a great prestige in the regional and global scale as a serious economic and political partner.

The results of this meeting once again demonstrated complete coincidence of interests of Azerbaijan and the European Commission on the Southern Gas Corridor project.

Minister Aliyev further said that an important part of the work on the Shah Deniz-2 and expansion of the South Caucasus Gas Pipeline projects, which are important parts of the Southern Gas Corridor project, has been completed ahead of schedule.

"Currently, work on the project is underway apace, large-scale measures are being conducted in all construction and industrial zones of the country, including at the Sangachal terminal, construction site near Baku, Baku Deepwater Jackets Factory and along the pipeline route," he noted. "Also, top units and support blocks of the platform are being installed in industrial zones. Some 66 percent of the work towards receiving the primary gas has already been implemented."

In the first quarter of 2016, work within the framework of the project on expansion of the South Caucasus Pipeline continued successfully along the route of the pipeline in the territories of Azerbaijan and Georgia.

Speaking about the Trans-Anatolian pipeline project designed to bring Azerbaijani gas to Turkey, Aliyev said that construction works started in March 2015 and continues without interruption.

"Pipes have been delivered to the construction site and welding works have been started. So far, more than 20 percent of total work on construction of TANAP has been completed," he said.

Touching upon the Trans-Adriatic pipeline, which will join TANAP and bring Azerbaijani gas to final consumers, Aliyev said that the European Commission has included this project in the list of 33 priority energy security projects serving for common interests.

Today the Southern Gas Corridor is among the European Commission’s priority energy projects, which aims at diversifying the EU gas supply sources and routes.

This project envisages the transportation of the gas extracted at the giant Shah Deniz field in the Azerbaijani section of the Caspian Sea. Shah Deniz Stage 2 gas will make a 3,500 kilometer journey from the Caspian Sea into Europe. This requires upgrading the existing infrastructure and the development of a chain of new pipelines.

The existing South Caucasus Pipeline will be expanded with a new parallel pipeline across Azerbaijan and Georgia, while TANAP will transport Shah Deniz gas across Turkey to TAP, which will take gas through Greece and Albania into Italy.

The first gas supplies through the corridor to Georgia and Turkey are given a target date of late 2018. Gas deliveries to Europe are expected just over a year after the first gas is produced offshore in Azerbaijan.

Aliyev also revealed Azerbaijan's oil and gas production figures for the first quarter of 2016. He said that the South Caucasus nation produced 10.5 million tons of oil compared to the projected 9.9 million tons.

Some 82 percent of crude oil was extracted from the Azeri-Chirag-Gunashli block of oil and gas fields, and the Shah Deniz field. During this period, some 8.9 million tons of oil was exported.

Ukraine has sent the draft agreement on establishment of the Baltic Sea-Black Sea-Caspian Sea international transport corridor to the Azerbaijani ...