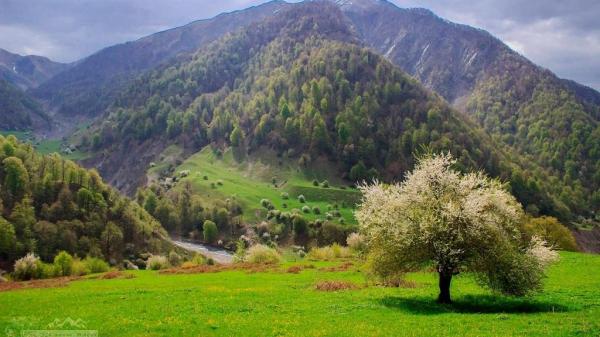 Azerbaijan with its rich history and fascinating nature attracts more and more tourists each year. The country's national parks often become travel destinations for them.

As many as 79,997 people visited the national parks of Azerbaijan in 2018. Of this amount, 7,478 were foreign guests of the country, the Ministry of Ecology and Natural Resources reported on January 4.

Those who wish to visit the national parks can purchase tickets on the website of the Ministry of Environment in the "Services" section or at the entrance to the parks.

Azerbaijan is famous for its national parks, where you can go hiking if you prefer active holidays or have a simple pleasant picnic if you are there just to relax. Azerbaijan's national parks offer you to get exciting impressions, take care of your health, or just relax your body and soul. Let's take a closer look at some of the national parks of the country.

The park of 12,755 hectares is a fascinating mountain landscape, dense forests and a crystal clear lake. Goygol park is located four hours from Baku. Visitors can also go to the mountains of the Lesser Caucasus, the height of which is 1,000-3,060 meters above sea level. In Goygol Park there are about 80 different types of trees, including the Caucasian hornbeam, oriental oak and beech, ash and birch; more than 50 species of birds, as well as the Caucasian deer, roe deer, brown bear, goat, badger, forest cat, sable, lynx, hare and Caucasian mole. The park was founded in 1925 and was named the Goygol State Reserve.

Stretching over 322,492 acres, the Shahdag National Park is considered the largest national park in the Caucasus. Located near the border with Russia, the park covers six regions of Azerbaijan, as well as the territory of the Ismayilli and Pirguli nature reserves.

The Shahdag park celebrated its 10th anniversary in 2018. It was created with the aim of preserving rare species of trees, animals and birds, restoring the local ecosystem, protecting natural complexes and developing ecotourism. The park is located on the southern slopes of the Greater Caucasus Mountain Range at an altitude of 1,300-1,600 meters. There you can find such types of trees as Caucasian oak, chestnut-leaved oak, senna, European wild pear, as well as other rare plants. The park is one of the five most popular tourist destinations in the winter among the CIS countries.

The name of the reserve means "pink trees", in honor of the pink flamingos living there. Opened in 1929 on the southwest coast of the Caspian Sea, the Kyzylagadzh reserve became the first state reserve in Azerbaijan. Its area is 218,441 acres. About 248 species of birds live here, including the gray goose and the white-fronted goose, the turoch, the donut, the common spoonbill and many other rare birds. The waters of the reserve are inhabited by 54 species of fish, including pike perch, kutum, carp, mullet and salmon, and the forests - wild boar, reed cat, badger, wolf, otter, jackal and fox.

The Zangezur National Park extends to 105,753 acres in the Ordubad district of the Nakhchivan Autonomous Republic. It was created with the aim of preserving and restoring populations of rare animals - the Transcaucasian mouflon, leopard, bezoar goat, Caucasian black grouse, brown bear and striped hyena. The park inhabits more than 58 rare species of animals.

The Hirkan National Park was established in 2004 on the territory of two regions of Azerbaijan: Lankaran and Astara. The area of this national park is 42,797 hectares, and all of them are occupied with picturesque bright greens of numerous plants. Of the plants spread on the territory of Azerbaijan, 1,900 species grow in the Hyrkan forests, including 162 endemic, 95 rare, 38 endangered species. Among them Hirkan boxwood, ironwood, chestnut-leaf oak, fig, pearl Hirkan, Lenkoran albition, Caucasian persimmon and alder are listed in the Red Book.

Ag Gol National Park is located on the territory of Agjabadi and Beylagan regions of Azerbaijan. This park was created in 2003, and its area is 17,924 hectares. The main feature of the park is that about 99 percent of the territory consists of water area and only 1 percent of islands and coastlines.

This national park was opened in order to protect and preserve the natural complexes of reed-marshy thickets and the water area of Ag Gol Lake. This, by the way, is the habitat and nesting of many waterfowl and near-water birds. The ornithological fauna of the Ag Gol National Park is extremely diverse. Here you can find more than 140 species of birds, of which 89 species nest in the park. Also, in the park’s fauna, there are such mammals as wild boar, nutria, reed cat, wolf, jackal, fox, hare and others, and, of course, there are 8 species of amphibians and reptiles, including Syrian garlic, Caspian tortoise and water.

Established in 2003, the Shirvan National Park is one of the largest in the country, its territory is 55 hectares. Here is the warmest winter in Azerbaijan. Reed cats, badgers and turtles co-exist here, as well as wolves, foxes and wild boars. However, its main inhabitants were still gazelles, for which the semi-desert landscape of the park is a natural habitat.

In the 20th century, environmentalists of Azerbaijan began to sound the alarm due to the decrease in their numbers, and therefore it was decided to create a Shirvan National Park for the protection and reproduction of gazelles. After many years, the task was completed, gazelles increased their population and now the Shirvan Park is the only natural habitat of gazelles in Europe.

The park was created on August 31, 2004, by a decree of President Ilham Aliyev in the Khizi and Siyazan regions on the basis of the Altyagadzh State Nature Reserve and the lands of the State Forest Fund adjacent to it. About 90 percent of the park, dominated by trees such as oak, beech and hornbeam, occupy mountain forests with rich flora and fauna.

The name of the park comes from the word "agadzh" - a measure of distance, was approximately 7 kilometers, and "alty" in the local dialect means six. It occupies an impressive area of 11,035 hectares. This national park was created to develop ecotourism, protect natural complexes, preserve and restore the flora and fauna of the area and preserve the natural landscape of the southeastern ridge of the Greater Caucasus.

The Absheron National Park was created in 2005. The purpose of its creation was the preservation of gazelles inhabiting this territory, Caspian seals and waterfowl. It is located in Azerbaijan, on the territory of the Azizbek district of Baku. The park area is 783 hectares.

The land area is inhabited by gazelles, jackals, foxes, badgers, hares, and the waters of the Caspian Sea - seals and fish.

Of the birds, there are a silver gull, puffing swan, coot, gray red-headed and black ducks, sandy sandpiper, marsh harrier, and other migratory birds.

The Samur-Yalama National Park was established in an area of 11,772 hectares on the territory of Khachmaz region in accordance with the decree of the President on November 5, 2012.

The aim of establishment of the Samur-Yalama National Park is to ensure the conservation of natural complexes, the genetic fund, biodiversity, rare and unique natural areas, the historical and cultural objects, to create conditions for tourism and recreation. Ecotourism in the territory has great potential.

Azerbaijani troops on Friday, July 8 morning opened fire on the road from Voskepar to Baghanis on Armenia-Georgia interstate highway ...

Washington (AFP) - Washington and Moscow on Tuesday accused each other of ...